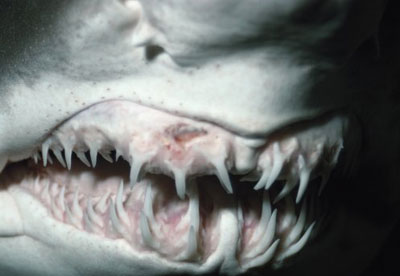 Shark teeth can be found on just about any beach, but some areas are better known than others for the amount and quality of teeth that can be found. Venice, Fla., on the Gulf of Mexico, is the self-proclaimed "shark tooth capital of the world." The gulf has had sharks living there for millions of years, and the erosion of the beaches in Venice make it a hot spot for unearthing these buried sea collectibles.

Something that many people may not realize is that sharks have no bones. Their skeleton is made entirely of cartilage, a kind of elastic tissue. Cartilage is softer than bone and will dissolve over the years in the ocean's salt water. Once the cartilage of a dead shark is gone, the only thing left is its razor-sharp teeth -- made of calcified tissue called dentine and hard enamel. These teeth settle on the ocean floor and eventually get washed closer to the beach where tooth hunters gather them up for their collections.

Sharks shed their teeth continually over the course of their lives. At any given time, a shark will have between five and 15 rows of teeth growing behind their functional front chompers. As the front teeth fall out, the ones behind them assume the duty as the mature denture. And unlike human teeth, shark's teeth don't have roots to hold them in place, which helps explain why they fall out with such frequency. A tooth is usually in service for about a week, but some can be replaced in as little as 24 hours.

But why are people so into collecting the teeth? An interesting fact on the next page may help answer this question.