by Jesslyn Shields May 5, 2020
The Asian giant hornet (Vespa mandarinia) is the world's largest hornet. Native to parts of Asia and Russia, it was found in the Pacific Northwest in late 2019, although so far it's not known to have become established there. Wikimedia Commons (CC By-SA 4.0)

Most insects won't hurt you — it's a fact. And yet, it's worthwhile to fear some bugs, especially if they're the size of your entire thumb, have a quarter-inch-long (6-millimeter) stinger and a sting that is commonly said to be like being pierced with a red-hot needle. Also, as a general rule, maintain distance from anything popularly known as the "murder hornet."

The Asian giant hornet (Vespa mandarinia) is the biggest hornet in the world, and with its sinister-looking goggle eyes and black and orange tiger stripes, it's pretty easy to identify as one of the bugs to leave alone. Only the queens grow to be truly gigantic — more than 2 inches (50 millimeters) in length, while her workers are a little smaller at around an inch and a half (40 millimeters), but their tendency to gang up on the object of their ire can be deadly, no matter their size. Their venom is extravagantly toxic — in Japan, between 30 and 50 people die each year from receiving multiple stings — and some years, when their populations are particularly high, their numbers can cause full-on public health crises, as they did in the Shaanxi province of China in 2013, when the hornets killed 42 people and injured 1,600 in just a few months.

Native to the forests of East Asia and Japan, these hornets generally dine on tree sap, honeybee colonies and the honey therein. A normal hornet attack on a honeybee hive can involve up to 50 hornets, but just one Asian giant hornet attacking a honeybee colony can kill up to 40 bees per minute, shearing their heads from their bodies with its mandibles and tossing their thoraxes to the ground, which will later be collected and carried back to the nest to feed the colony.

Not convinced? How scary can a little hornet be? Check out the video below of an Asian giant hornet massacring a mouse. And be forewarned, it isn't for the faint of heart.

With honeybee colonies in the United States facing extreme pressures due to colony collapse disorder (CCD), it would be really bad if the Asian giant hornet were to find its way to the U.S. You see where this is going, of course.

In December 2019, Asian giant hornets were discovered in the U.S. for the first time — in Washington state, possibly having traveled down from Canada, where a hive was found and destroyed in 2019. Experts in the state are frantically searching for hives in order to destroy them. So, if you live in the United States and see an Asian giant hornet, call your local Department of Agriculture.

Now That's Interesting
Honeybees that evolved alongside the Asian giant hornet have an ingenuous technique for killing the invaders: They surround the enemy and cook them alive in a 115-degree F (46 degree C) ball of bees! 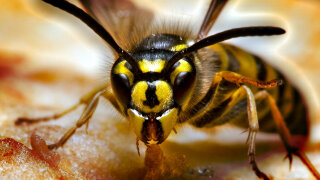 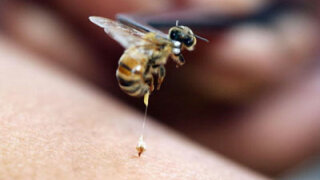