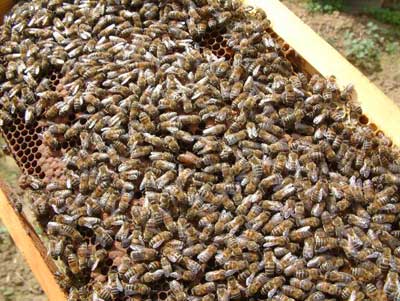 The sheer number of bees in colonies and swarms led some to believe that bees reproduced spontaneously. See more insects and biodiversity pictures.
Image courtesy MorgueFile

In the creation story of the Kalahari Desert's San people, a bee carries a mantis across a river. The river is wide, and the exhausted bee eventually leaves the mantis on a floating flower. The bee plants a seed in the mantis's body before dying, and the seed grows into the first human.

The San are not the only people to include bees in their myths and stories. According to Egyptian mythology, bees were created when the tears of the sun god Ra landed on the desert sand. The Hindu love god Kamadeva carries a bow with a string made of honeybees. Bees and their hives appear in religious imagery and royal regalia in multiple cultures, and people around the world use honey and pollen in folk medicine and religious observances.

The idea that there is something divine or mystical about bees isn't confined to religion and mythology. Until the 17th century, many people, including beekeepers, thought that bees reproduced spontaneously, without the aid of sexual reproduction. But in the 1660s, Jam Swammerdam examined a queen bee through a microscope and discovered female sex organs. Around the same time, Francesco Redi proved that maggots formed in meat only when flies had landed there. It became clear that bees and other insects reproduced by laying eggs, not by magic.

Even though they do not reproduce through autogenesis, or spontaneous generation, bees do exhibit many other traits found in stories and myths -- traits that have led many cultures to view them with reverence or awe. This is particularly true of social bees, or the species that live in colonies. Social bees are organized, industrious and intelligent. They work diligently all summer in order to produce enough food to survive the winter. Social bees are clean and fastidious, and they arrange their lives around one central member of the hive -- the queen.

But most bees aren't social. They don't live in hives or work together to support a queen. In this article, we'll look at how social bees are different from solitary bees. We'll also explore how bees make honey and examine the potential causes and effects of Colony Collapse Disorder.