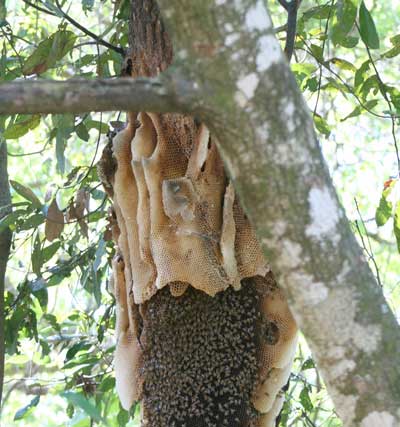 A honeybee colony in the wild
Image courtesy MadMaven/T.S.Heisele/ Stock.xchng

In scientific terms, bees are in the insect superfamily Apodiea. This superfamily includes lots of families, subfamilies, tribes and approximately 20,000 bee species. The bees in each family have traits in common, like methods for building nests. Different species usually have different physical traits, like wing shape or tongue length.

Many people are most familiar with honeybees and bumblebees. These are both social bees -- they live in large groups. Social bees use waxy secretions from their bodies to build large nests and containers in which to store food and raise young. A third type of social bee is the stingless bee. Stingless bees are native to tropical areas, where some societies use them for honey production. Until recently, stingless bee husbandry was common in the Mayan regions of South America, but the practice has nearly disappeared in the last 20 years.

Although honeybees and bumblebees are both social, their societies differ considerably. Honeybee colonies, or hives, are perennial. A queen and her daughters use wax from the wax glands on their abdomens to build a nest that lasts them for generations. If the hive becomes overcrowded, the workers, who are all female, will raise a new queen by feeding her royal jelly from a gland on their heads throughout her development. The old queen will leave the hive with about half of the workers in order to build a new nest, and the new queen will stay behind. The bees know that they need to raise a new queen when they stop receiving enough queen substance - a pheromone that the queen produces in her mandibular glands.

When honeybees leave a hive to start a new nest, they form a swarm.
Image courtesy MorgueFile

Bumblebees, on the other hand, have annual nests. Each year, the queen mates in the fall and then spends the winter underground. In the spring, she emerges and builds a nest in which she lays eggs. When her daughters hatch, they become workers, and they help the queen enlarge the nest. At the end of the summer, the queen lays eggs that hatch into new queens and male drones. The drones gather at a mating site in order to mate with the queens from various colonies, and the cycle continues.

Many people are most familiar with social bees because they can be more visible than solitary bees. Many social species produce substances that people use, like honey and beeswax, and people can see large groups of social bees feeding in orchards and gardens. But most bees aren't social -- less than 15 percent of bees live in colonies. The rest are solitary. They may exhibit some social tendencies, but they don't build large hives or store lots of extra honey. Instead, they build small nests that are big enough to hold a few eggs or a single egg. Sometimes, lots of solitary bees build their nests close together, but with the exception of mating and the occasional group defense of the nest site, these bees do not usually interact with each other.

Lots of solitary bees are known for how they make their nests. They may use cerumen, a type of wax secreted from their bodies, or propolis, a glue bees make from tree resins. Many bees add other materials to these substances. For example:

Other bees take advantage of existing materials when they build their nests. Some use empty termite hills or wasp nests. A few species lay their eggs in empty snail shells, either dividing the cell into chambers using glandular secretions or laying one egg in each shell. A few bees, known as cuckoo bees, are parasitic - they lay their eggs in the nests of other bees. Some cuckoo bees don't have any structures for collecting pollen, since they rely on other bees' pollen to feed their young.

The orchid bee, Apinae euglossini, has an extremely long proboscis that it uses to reach nectar deep inside of orchid flowers.
Image courtesy Ralph Holzenthal/©2003 Regents of the University of Minnesota

Other solitary bees are known for the types of flowers they frequent or other distinguishing traits. Tiny sweat bees, for example, are attracted to people's sweat. Orchid bees are brightly colored and often have a metallic appearance. Scientists believe that orchids and orchid bees have co-evolved so that the two are now dependent on one another. Orchid bees have a very long proboscis, and orchids store their nectar very deep within their blossoms. Orchid bees are one of the few species in which the males perform productive activity other than mating. In some species, male orchid bees collect fragrant oils from blossoms using scraper-like segments of their legs. Since the female orchid bees do not collect these oils, scientists believe that the males may use them to attract a mate.

While social and solitary bees have considerable differences in how they live and build nests, they have a lot in common when it comes to reproduction. We'll look at the bee life cycle in the next section.

Africanized honeybees have spread from Brazil to other parts of Central and South America and southern portions of the United States, including Florida, California and Arizona. These bees are most dangerous when people and animals venture too close to their nests, but they do produce honey and pollinate plants like other honeybees do. You can learn more about Africanized honeybees and how to avoid them from Texas A&M University.