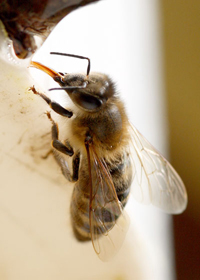 Bees find food the same way other animals find food -- through sensory input and an understanding of the features of their environments. Bees have an acute sense of smell, and they can remember and recognize patterns, such as the patterns of colors that are likely to be near good food. They can also recognize symmetry, a trait that scientists typically associate with more intelligent life forms. All of these abilities help bees find and recognize flowers, which produce the pollen they use for protein and the nectar they use for energy.

A solitary bee's life and the life of her young depend on her ability to find food, gather it and return it to the nest. For a scouting social bee, her colony's survival depends on the same things, as well as her ability to tell her hive mates how to find the food. Some social bees do this by marking a trail with aromatic flower oils or by guiding their hive mates part of the way. Honeybees tell their sisters how to find food, water, resin and new nest sites using one of the most-studied animal languages -- dancing.

When a honeybee scout finds food, she uses two known tools to understand where it is. One is her solar compass, which lets her remember where things are in relation to the sun. The bee's ability to see polarized light lets her determine where the sun is regardless of whether it is obscured by clouds. The other tool is her internal clock, which lets her keep track of how far she has flown. Her internal clock also lets her determine of how much the sun moves during her journey. In other words, when she returns to the hive, she can tell her sisters exactly where the food is in relation to the current position of the sun, not the position of the sun when she found the food. As a bee matures, she also learns about how the sun's path across the sky changes during different seasons of the year and at different latitudes if her hive is moved. She can incorporate these changes into her measurements.

When she returns to the hive, the scout bee recruits her sisters to carry the food back to the nest. They, like the scout, are the oldest bees in the hive. The scout distributes samples of the food, which will help her sisters find the food when they reach their destination. Then, she performs a dance on the vertical surface of the combs in the hive. The area on which she performs the dance is commonly known as the dance floor, and the worker bees who observe the dance are followers.

If the food is nearby, the bee performs a round dance by traveling in loops in alternating directions. The round dance doesn't convey much information about exactly where the food is. However, it's generally close enough that the worker bees can smell it fairly quickly.

The speed of the returning loops lets the other bees know about the quality of the food source, but the bees learn where to go by following the waggle run. By vibrating her wings and waggling her abdomen, the dancing bee moves a lot of air. The bees around her can feel this air movement. The ones directly behind her, where the air movement is greatest, get a clear idea of where to fly and how far to travel. Once they reach the described position, they begin flying in a search pattern until they find the food source. After that, they make up to a dozen trips back and forth between the hive and the food, remembering the food's position each time. During each trip, each bee can carry half her weight in pollen or nectar. If necessary, they perform a tremble dance, in which they run in many directions while trembling, to encourage the other bees to begin unloading nectar.

Bees in the hive unload the pollen and nectar and store it in the beehive's cells. These bees are younger than the foragers, but older than the nurse bees. It's up to these workers to determine when the hive has enough of a type of food or building material and to inform the foraging bees. They do this by changing the way they accept the material. If they accept it eagerly, the foragers know that the hive needs more. But if the workers are reluctant to unload the material, the foragers know that the hive has plenty.

In order to conserve space and preserve their food, bees transform the nectar into honey. The process gives honey some unique properties -- we'll look at them in the next section.

The use of bee products -- including honey, gathered pollen, royal jelly and beeswax -- to treat or illnesses or injuries is known as apitherapy. Apitherapists advocate everything from the use of bee stings to combat arthritis pain to the use of honey to treat cuts and scrapes. Medical science has not confirmed many of the healing abilities attributed to these substances. However, honey does have clear, medically documented antibacterial properties.