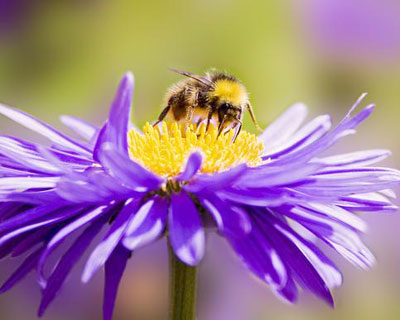 Scientists suspect that bees and flowering plants both evolved around 100 million years ago, in the middle of the Cretaceous period. Before this period, many plants reproduced the way today's conifers do. They released seeds and pollen using cones. The wind carried the cones, and eventually the pollen came into contact with the seeds and fertilized them. During the Cretaceous period, some plants began to reproduce using flowers. Unlike conifers, these plants, called angiosperms, needed the help of insects and other animals to reproduce. Insects had to physically move pollen grains from plants' anthers, or their male structures, to their stigmas, or female structures.

At about the same time, bees differentiated themselves from their wasp-like ancestors. Prehistoric wasps were carnivores that lay their eggs in the bodies of their prey. Bees became herbivores, eating pollen and nectar from the newly-evolved plants and pollinating flowers as they went. Fossil evidence supports this theory -- the oldest known bee fossil is 100 million years old, and the preserved bee has several wasp-like features. This doesn't necessarily mean that bees evolved from wasps. It's more likely that bees and wasps both evolved from a mutual, wasp-like ancestor.

Today, bees still have several physical features in common with their wasp cousins. They also share some traits with ants. Together, bees, wasps and ants make up the insect order Hymenoptera, which means "membranous wings."

A bee's body has a lot in common with the bodies of other insects. Much of it is covered in an exoskeleton made from small, movable plates of chitin. A bee's body is also covered in lots of fuzzy, branched hair, which collects pollen and helps regulate body temperature. The body also has three sections -- the head, the thorax and the abdomen.

The head houses the brain, a collection of about 950,000 neurons. These neurons are specialized, and they communicate with specific neighboring neurons. This division of tasks is part of why a bee's brain, which is a fraction of the size of the bee's head, can perform complex tasks that might ordinarily require a bigger brain. A system of nerves allows the brain to communicate with the rest of the body.

On its head, a bee has two sensory antennae. It also has five eyes -- three simple eyes, or ocelli, and two compound eyes. The compound eyes are made of lots of small, repeating eye parts called ommatidia. In each compound eye, about 150 ommatidia specialize in seeing patterns. This allows bees to detect polarized light -- something human beings cannot do.

Like most insects, a bee has complex mouth parts that it uses to eat and drink. The sizes and shapes of these parts can vary from species to species, but in general, most have:

The labrum and maxillae are like lips. They support a proboscis, or tube for collecting nectar.

A bee's two pairs of wings and three pairs of legs connect to its thorax. The wings are extremely thin pieces of the bee's skeleton. In many species, the front wings are larger than the back wings. A row of hooks called hamuli connect the front and rear wings so they beat together when the bee is flying.

We'll look at bee legs and the one part everyone remembers -- the stinger -- in the next section.