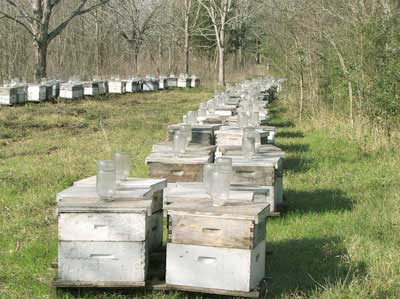 In the spring of 2007, news agencies began to report on a disturbing phenomenon in the bee population. According to reports, beekeepers were visiting their hives to discover that their bees had disappeared. Sometimes, the queen and a few newly-hatched bees were all that remained. The beekeepers found no evidence of predators that feed on bees, like wasps and mammals that like honey. They also didn't see a lot of dead bees or evidence of bee diseases like chalkbrood or foulbrood, which attack the developing bee larvae, or of any of the species of mites that attack developing or fully grown bees. Based on this evidence, it seemed unlikely that the bees had gotten sick and died. On the other hand, many beekeepers reported that moths, animals and other bees steered clear of the newly-empty nests, at least for a few days. This usually happens when bees die because of disease or chemical contamination.

Many of the news reports were alarming. They described beekeepers losing more than half of their bees and explained the importance of honeybees in the pollination of food crops. Some articles implied that the disappearance of the bees would lead to widespread starvation. Others quoted Albert Einstein as saying that humans would follow within four years if bees became extinct.

It's highly unlikely that Einstein ever made his now-notorious statement on bees, but Colony Collapse Disorder (CCD) is a real phenomenon. It has the potential to dramatically impact food and honey production, but it's more complex than some of the reports make it out to be. First, CCD has primarily affected domestic, commercial honeybees - those that are raised exclusively for producing honey and pollinating crops. It seems to affect bees from hives that are moved from place to place in order to pollinate crops. Commercial honeybees make up a tiny portion of the overall bee population. Other types of bees, including Africanized honeybees, do not seem to be affected.

This also isn't the first time that the population of honeybees has declined suddenly and unexpectedly. The populations of individual colonies can decline sharply during the winter as bees naturally die. In addition, beekeepers have reported sharp decreases in their hive populations several times in the last hundred years. In 1915, beekeepers in several states reported substantial bee losses. The condition became known as Disappearing Disease, not because the bees disappeared, but because the condition was self-limiting and did not recur.

Researchers never determined the cause for Disappearing Disease or subsequent declines in bee population. The causes of CCD are still unclear, and several possibilities have been ruled out because they are not present in all of the affected colonies. For example, beekeepers with affected colonies have different methods for feeding their bees and for controlling mites and other pests. Bees in the affected colonies do not seem to have come from the same bee supplier. The Colony Collapse Disorder Working Group, which is investigating the phenomenon, also does not suspect that genetically-modified crops are to blame.

However, there are some prevalent theories on the causes of CCD:

One common theory -- that cellular phones may be causing CCD -- has been widely discounted. This theory made the news in April 2007, after "The Independent" featured an article on a link between cell phones and bee disappearance. However, the study that "The Independent" cited was not related to cell phones. The researchers were instead studying the electromagnetic energy coming from the base units of cordless phones by implanting the bases directly in the beehives. A cordless phone uses a different wavelength of electromagnetic energy than cellular phones do.

Approximately 15 percent of the food Americans eat comes directly from honeybee pollination. Another 15 percent comes from animals that eat foods that bees pollinate. In other words, close to a third of the food that Americans eat currently requires honeybee pollination. Some articles claim that Americans will also lose their entire supply of meat without honeybees to pollinate their food. This isn't necessarily true. Some plants, like red clover and alfalfa, are a substantial food source for cows and other grazing animals. Bumblebees frequently pollinate red clover, and solitary alfalfa bees frequently pollinate alfalfa. In other words, the decline in honeybees does not necessarily mean that these plants will lose their pollinators.

It's not unusual for wild bees to be significant pollinators of wild plants and crops. In fact, until the 16th century, there were no honeybees in the Americas -- wild bees, solitary bees and other animals did all of the necessary pollination of flowering plants. Spanish colonists introduced honeybees to the Americas to improve honey production. Although most people consider honeybees to be an asset, they are technically an invasive species.

Unfortunately, if honeybees were to become extinct, it would be difficult for wild bees to resume their role in pollinating food crops. There are a couple of reasons for this:

At this point, it's unclear exactly where the honeybee species is headed and exactly how the drop in population will affect the world's food supply. Although the drop in population may not lead to the sudden extinction of the human race, it is likely to have a substantial effect on what we eat if it continues.

To learn more about bees, honey and related topics, check out the links below.