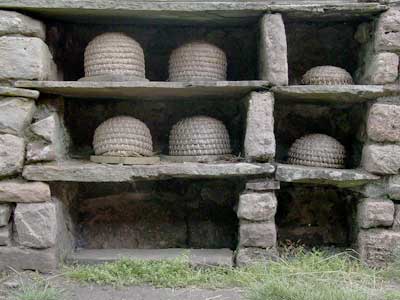 Over hundreds of years, people have developed many types of manmade hives that provide shelter and living space for bees while making it easier to harvest honey. The most commonly-used model today is the Langstroth hive, developed by Lorenzo Lorraine Langstroth in the 1850s. Prior to Langstroth's inventions, people primarily kept bees in basket-, box- or log-like hives. Some of these had removable top bars from which the bees suspended their combs. Others had no convenient way for accessing or removing honey. Top-bar hives are still in use in some parts of the world, and Mayan beekeepers raising stingless bees still use log-like hives.

Langstroth discovered that it was possible for people to influence how bees built their combs by adjusting the amount of space between building surface. This area, known as bee space, allows bees to move around, care for young, build new honey combs and produce honey. According to Langstroth's theories, the ideal amount of space between honeycomb layers is between ¼ inch and 5/16 inch (6.4-7.9 millimeters).

The Langstroth hive uses a multi-layered structure and removable frames to encourage bees to build their hives in an orderly fashion and to make it easier for beekeepers to harvest honey. From the bottom up, the layers are:

Beekeepers usually use shallow supers rather than full-sized supers for honey storage because honey is relatively heavy. A shallow super weighs about 35 pounds (15.9 kilograms) when full, and a deeper super weighs closer to 80 pounds (36.3 kilograms). This makes it easier for the beekeeper to remove and replace the supers. Bees will continue to make and store honey as long as they have enough storage space, so removing filled combs and replacing them with empty ones is important to beekeeping. It's also important to make sure the bees have enough food for the winter -- for this reason, many bee keepers perform their last honey harvest in the late summer so that the bees can collect nectar and turn it into honey in the fall.

To harvest honey, beekeepers can remove the framed combs from the shallow supers and spin them in a centrifuge, or honey extractor. This removes the honey from the comb while leaving the structure intact. Since it takes about 20 pounds (9 kilograms) of honey to make a pound (0.45 kilograms) of beeswax for the hive, reusing combs generally makes it possible for beekeepers to harvest more honey.

This setup makes it relatively easy for a beekeeper to harvest honey without damaging the hive or hurting any of the bees. The beekeeper does have to be careful, though. Many beekeepers use a veil and gloves to protect their faces and hands from stings while working with their hives. Beekeepers also move very slowly when opening the hive and removing and replacing the frames. This is important since bees release an alarm pheromone when they are crushed or use their stingers. This pheromone encourages their sisters in the hive to sting anything nearby. Beekeepers can mask this pheromone with smoke from a bee smoker, which is essentially a set of bellows attached to a fireproof can with a nozzle at the top. The smoke also encourages the bees to stop working and start eating honey in case they have to abandon their hive due to fire. This makes it less likely that the bees will become agitated or defensive as the beekeeper works at the hive.

One colony of bees can include thousands of workers. To make lots of honey, these bees need very large food sources, such as orchards, large vegetable farms or other areas of dense, flowering foliage. But beekeepers, particularly those who have very large-scale operations, do not always live close enough to the right food sources to support all of the bees. Some supplement their bees' natural foods with manmade nectars and purchased pollen. Others rent their bees to farmers, who use them for crop pollination. Without the rented bees, the crops would not bear the necessary food.

This reliance on honeybees for crop pollination is one reason why many people are concerned about a phenomenon known as Colony Collapse Disorder (CCD). Next, we will look at the myths and realities behind CCD.

Beekeepers can get their bees from several sources. Sometimes, a beekeeper will capture a swarm that has gathered on someone's property. Beekeepers also stock their hives with queens and packages of bees purchased from a bee supplier.