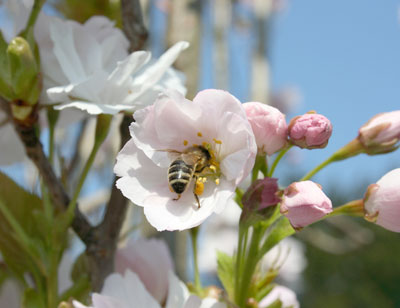 The baskets on this bee's hind legs, made from hair, are full of pollen.
Image courtesy MorgueFile

The legs have the same basic parts as other insect legs. Beginning with the part closest to the bee's body, they are the coxa, trochanter, femur, tibia and tarsus. These parts act basically like the bee's hip, thigh, shin and foot, and tiny joints separate each segment. A bee's legs can also have several specialized structures, including:

The abdomen has almost no appendages, but it houses nearly all of the bee's internal organs. Passageways called spiracules allow the bee to breathe, and a network of tubes and tracheae carry oxygen into the bee's body. An aorta in the thorax pumps blood, or hemolymph, directly over the organs rather than through a system of vessels. Oxygen floats in the hemolymph without the use of red blood cells, so the fluid is colorless instead of red. The abdomen also holds a tube-like digestive system that includes a crop, or honey stomach, where the bee holds nectar.

A bee's abdomen does have one notable appendage -- the stinger, which is a modified ovipositor, or egg depositor. This stinger combines a poison sac with sharp lancets, which deliver the venom that the bee produces using its venom gland. Many scientists believe that bees inherited their venom from their wasp-like ancestors, used their ovipositors to lay their eggs in the bodies of other insects. Eventually, the substances that coated the ovipositor became venomous, which made it easier for prehistoric wasps to subdue prey.

Bees don't lay their eggs in meat, but they retain the ability to sting to defend themselves. However, some bees don't have stingers. Ovipositors are female reproductive organs, so male bees usually can't sting. There are also several species of stingless bees, which do not have stingers at all.

Several honeybee species have barbed stingers, which stick in the bodies of mammals, pulling out part of the bee's abdomen when she flies away. As a result, the bee dies. Bees with barbed stingers can often sting other insects without harming themselves. Queen honeybees and bees of many other species, including bumblebees and many solitary bees, have smooth stingers and can sting mammals repeatedly.

In addition to its venom, a bee produces a number of useful substances in glands located throughout its body. The types of glands vary considerably depending on the species of bee and how it lives. We'll take a look at the different types of bee and how they use the substances their bodies produce in the next section.

A bee's venom contains several substances that destroy cells. These include peptides and enzymes that break through and destroy the layer of fats lining each cell. The venom also destroys the skin's mast cells, which are part of the body's immune system. This releases histamine, which encourages blood vessels to dilate and allows immune cells to reach the sting site faster and neutralize the venom.

However, in people with bee sting allergies, this process releases too much histamine. The blood vessels' dilation response is extreme, and they can no longer do their part in regulating blood pressure. As a result, blood pressure drops rapidly, and cells stop receiving oxygen. This type of anaphylactic shock also causes swelling and spasms and can lead to death. The typical treatment is an injection of epinephrine, which constricts the blood vessels, helping to restore blood pressure and oxygen delivery.