by Jesslyn Shields Mar 20, 2020
The fruit fly (Drosophila melanogaster) is an annoyance we all live with at one time or another, but scientists see fruit flies a little differently than the rest of us do. Joao Paulo Burini /Getty Images

If you've ever swatted at fruit flies hovering over the fruit bowl on your kitchen counter and wondered what purpose they could ever possibly serve humanity, you're not alone. They are small, and they are annoying, but humans owe them a huge debt of gratitude for their contributions to the science of modern genetics. One species in particular — Drosophila melanogaster — is the superstar of tiny, annoying winged things.

Of course, you're happy for us — the lowly fruit fly and the large, glorious humans — who, together, tackled genetics and did a lot of cool stuff. But, like, why fruit flies? And how do you keep them out of your kitchen? And do we need to blame scientists for them being in your kitchen to begin with?

Why Fruit Flies Are Good for Science

Fruit flies have been used in biological studies for a long time, which means there are a lot of tools and resources for scientists using Drosophila melanogaster to ask interesting questions. But there are some specific reasons this species has always been a darling of geneticists.

For starters, in genetics it's helpful to have research subjects that can cycle through generations rather quickly, and fruit flies are great at that.

"Fruit flies create a new generation in about two weeks, making breeding them in the lab simple," says Thomas Merritt, Ph.D., professor in the department of chemistry and biochemistry at Laurentian University in Ontario, Canada, by email. "They're also small and easy to rear and care for, and it's easy to house as many of them as you need in a single lab at one time."

Also, fruit flies are also surprisingly similar to humans and other vertebrates. Drosophila melanogaster has 14,000 genes and we humans have somewhere between 20,000 and 25,000, and about 8,000 of our genes are analogous. Similarly, most fruit fly biochemistry is the same or similar to ours.

"Fruit flies are great to work on if you are interested in variation between individuals or genetic lineages," says Merritt. "They're also a great system if you are interested in experimentally altering the environment — they are so small we can do things like keep thousands of flies at different temperatures to see how temperature changes metabolism or gene activity. In one study in my lab, we use a small conveyor belt to slowly turn the vials we keep the flies in. This simple instrument is essentially a fly treadmill and we can get literally hundreds of flies exercising on a small desktop."

Fruit flies can be annoying in a lab, just like they can over the watermelon that's been sitting on your counter since this morning. To begin with, they're small, and it's very difficult to dissect a fruit fly, in case you were wondering. And although we share many of the same genes and genetic networks, we're separated from them by hundreds of millions of years of evolution, so it's hard to make assumptions about ourselves based on what we find in these little insects because there are substantial biological differences between us.

We do not need to blame scientists for the proliferation of fruit flies in the world — they would have been there regardless.

A fruit fly has pretty simple needs in order to prosper and multiply, and those needs are usually met in our homes: moderate temperatures and a source of fresh fruit that's on the overripe side. This is why fruit flies live high on the hog in places like dumpsters, compost heaps and kitchens.

"One interesting thing is, we seem to see more flies inside in the early fall," says Merritt. "I think that is from flies that have been happily breeding and multiplying outside all summer moving into the warmer inside spaces as the weather cools."

The good news is that fruit flies aren't dangerous in any way.

"They don't carry disease and they don't cause fruit to spoil or rot — at least Drosophila melanogaster doesn't — although there is at least one invasive species, the spotted wing fruit fly, that actually damages fruit crops and is a growing agricultural concern," says Merritt. "In my lab and in my house, we use a simple vinegar trap — a canning jar with some vinegar in the bottom and a top of plastic wrap with a few holes punched in it — to trap and remove flies."

Now That's Interesting
At least five Nobel Prizes have been awarded to scientists for their work on fruit flies.

8 Free Apps to Help You Stay Connected During Coronavirus 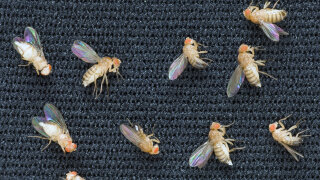 How to Get Rid of Fruit Flies 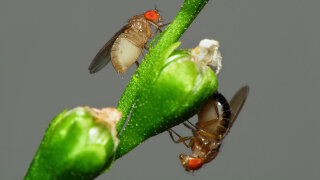