by Amanda Onion May 15, 2017
A seven-spotted ladybug (Coccinella septempunctata) displays the engineering marvel that is its wing system. Auscape/UIG via Getty Images

It's one thing to unfold an origami puzzle, but then try refolding it — quickly and without any fingers.

That's what the ladybug manages every time it settles down after flight. The beetle's ability to transform from a flying beetle to a walking one — and vice versa — in a fraction of a second offers it access to a broad range of habitats.

Research has shown that ladybugs and other beetles rely on elasticity and a hydrauliclike mechanism in their wing veins to flap out their hind wings, which are four times the size of the ladybug, itself.

To find out how the ladybug then manages to quickly fold and tuck everything back into its tiny, domed shell after flight, Kazuya Saito of the University of Tokyo's Institute of Industrial Science replaced two-thirds of the polka-dotted forewing of a ladybug (otherwise known as an elytron), with an artificial, transparent version made from the kind of resin used to make artificial fingernails.

Researchers transplanted a transparent artificial forewing, or elytron, onto a Coccinella septempunctata seven-spotted ladybug (left) to observe its wing-folding process in detail. The artificial wing is made of ultraviolet light-cured resin and constr...
2017 Kazuya Saito

Saito and his team then set up high-speed cameras to examine the unfurling and folding processes in action. The findings, which could inspire new engineering designs for flying robots, space-bound solar panels and even umbrellas, were released in May in the journal PNAS, published by the National Academy of Sciences.

They found a key element of the ladybug's design is the curved shape of its wing veins — a quality found in a carpenter's metal measuring tape.

"This structure is called tape-spring or convex tape and has been widely used in the space deployable structures such as extension booms and antennas in satellites," Saito says. It turns out, he says, that "ladybugs have used the same structure for more than a hundred million years."

The tape-spring design offers a firm structure when extended, but is also stable once bent and stored in compact form. Similar to the way carpenters can easily roll up their measuring tape by pressing in and curling the tape, the ladybug is able to fold in its hind wings by first closing its elytron and using the edge of the shell to press down on its hind wings. You can see the sequence of action in this video:

The motion, which is powered by nudges from the ladybug's abdomen, triggers the network of creases lacing the hind wings to fold. The curved alignment of the ladybug's shell with the creases of its wings further aid a clean and rapid tuck-in of its hind wings.

Saito says he was impressed by the simplicity of the insect's folding mechanism.

"Ladybugs effectively use flexibility and elastic behavior in the structures to achieve complex transformations," he says.

With the aid of micro computed tomography (CT) scanning, Saito's team further presented an overview of the intricate folds the ladybug uses to store its wings. The design features a diamondlike shape in the center, and the complexity of the pattern would likely confound even the most skilled origami master.

Matthew O'Neal, an entomologist and lady beetle expert at Iowa State University, called the idea to replace a ladybug's forewing with a transparent version a "novel" approach to understanding its otherwise hidden folding secrets.

"The cool thing about insects is they've been around for millions of years," O'Neal says. "So when you see that origami-like mechanism, you're seeing the product of millions of years of effort to get to a solution."

O'Neal and Saito envision multiple ways humans could borrow from the ladybug's methods. O'Neal explains that the ladybug's ability to transform quickly between walker and flyer offers it a key advantage as a predator (most ladybugs fly from plant to plant and then forage for small insects, such as aphids). Borrowing from the ladybug's technique, he says, could help in designing drones and unmanned aerial vehicles (UAVs).

"Having a robot that could fly to a destination and then quickly pull in those wings and explore could be really cool and useful," O'Neal says.

Saito imagines the ladybug could inspire new designs in the way satellite antennas and microscopic medical instruments operate. He also thinks the ladybug's mechanism could be tapped to invent something many of us have wished for on wet, blustery days: a wind-proof umbrella.

"Usually, frames of a collapsible umbrellas have many joints that can easily be broken," Saito says. "The 'ladybug umbrella' could be made with seamless flexible frames that would be indestructible even in strong winds, and able to be deployed very quickly by using stored elastic energy."

Now That's Interesting
Ladybugs may be master transformers, but fast fliers, they are not. The rigid shell of their polka-dotted forewings protect their folded hind wings, but they're not terribly aerodynamic. Ladybugs can only fly about 15 miles (24 kilometers) per hour. Compare that to dragonflies that can buzz up to 60 miles (97 kilometers) per hour.

What Happens to Red Carpet Dresses After Celebrities Wear Them? 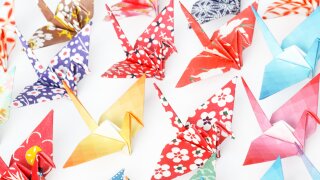 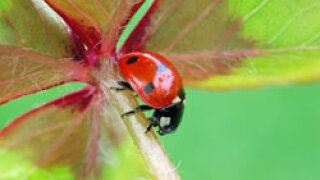 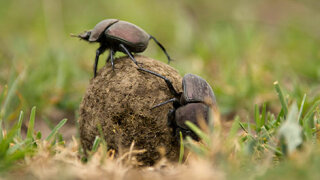