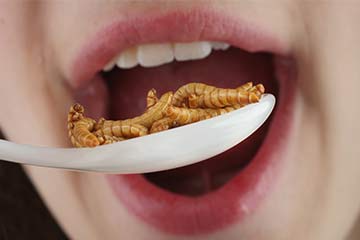 A young girl eats dried mealworms seasoned with an African rub of cinnamon, coriander, pepper and other spices, bought at a store selling insects for human consumption in Berlin.
Sean Gallup/Getty Images

Some people – quite a lot of them, actually – eat bugs on purpose. The rest of us consume them by accident. And we're not talking an ant or two here, a stray aphid there. No, it's more like a pound or two (453 to 907 grams) a year [source: Eplett]. Here's another fact that might be surprising: Most of those bugs are in processed and packaged foods, not fresh-from-the-farm produce.

The Food and Drug Administration has surprisingly specific guidelines about exactly how many bug parts can be in certain foods. Your 8-ounce (226-gram) glass of orange juice, for example, can legally contain five fruit flies. There could be 50 aphids, mites or thrips plus some caterpillar larvae in 3.5 ounces (100 grams) of frozen spinach. Thrips, tiny winged parasites that are up to an eighth of an inch long, hang out in apple butter, and frozen asparagus, broccoli and Brussels sprouts [source: FDA]. And that's just for starters.

You might be feeling a bit queasy right now thinking about what might be lurking in your pantry. But just think of this bug allowance as some bonus nutrition! Many insects are extremely nutritious -- just about the healthiest things you can eat! (Admittedly, thrips and mites are probably not some of them, but just play along here). There are about 1,500 edible insect species, and they're a regular part of the diets of more than 3,000 ethnic groups [source: Ramos-Elorduy].

Some bugs are an astounding 80 percent protein by weight. Caterpillars are a particular nutritional powerhouse, packing 53 grams of protein in 100 grams of caterpillar, plus plenty of iron, thiamine and niacin — much more nutritious than lean beef or even fish [source: FAO]. And they're supposedly delicious, too! Raising insects for food is also extremely sustainable: The same amount of feed produces four times as many crickets by weight than beef [source: Guynup]. In 2013, the United Nations Food and Agriculture Organization recommended that increased cultivation and consumption of insects is the best solution to the world's dire (and worsening) food-shortage issues.

If you'd rather not join the rest of the world and become an insect-eater, avoiding processed food in favor of fresh fruits and vegetables is the best way to keep your diet as bug-free as possible. Buy a pound of black-eyed peas at the market and you can wash them off yourself and inspect for bugs if you feel the need. With a can of peas, it's anybody's guess what's in there.

When you go to buy those fresh fruits and vegetables, though, you might find yourself having a conundrum in the produce aisle. Insecticide does have a way of ridding food of bugs, so conventional produce is going to have fewer bugs than the organic versions. But then you might be ingesting pesticide. Most people would probably choose the bugs.

Which Insect Inflicts the Most Painful Bite?
Asian Giant Hornets Are Now in the U.S. and That's Really Bad
Welcome to the Mosquito Factory