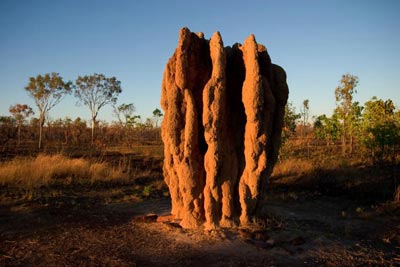 All social insects have some method for building a home. Honeybees build hives from wax, wasps build paper nests and bees dig tunnels in the ground. All termite species build nests, also known as termitaries or termitaria, but the specifics of these nests can vary.

Many primitive species build their nests in the food they're consuming. Scientists categorize these termites according to the type of wood they prefer -- damp, rotten or dry wood. In some cases, termites share their homes with fungi and bacteria that destroy wood. Termites often line these nests with particles of soil glued together with saliva, which helps the nests retain moisture and warmth. These colonies aren't particularly mobile, and when the wood runs out, the colony dies.

Subterranean termites dig large networks of galleries and tunnels underground. Galleries are used for food storage and for raising larvae. These underground networks give the colony a place to live, and they can connect the colony directly to sources of food, like the roots of decaying trees or the side of a person's house. If there's an obstacle between subterranean termites and a food source, they will often build shelter tubes, or extensions of their tunnels. Shelter tubes are usually about the diameter of a pencil, and they're made of soil glued together with termites' saliva.

An underground network of tunnels gives subterranean termites some flexibility in where they live. If the weather gets cold, workers can dig deeper into the soil in search of warmth. The same is true in times of drought. If it gets hot, the colony can move to parts of the nest that are shaded by aboveground structures and vegetation.

Since they're concealed in wood or underground, the nests of primitive and underground termites can be hard to locate. Termite mounds are another story. These dome- or tower-like structures can be taller than a person. They are made from particles of soil and termite excrement glued together with workers' salivary secretions. Some species build mound-like nests on the sides of stumps, trees or poles.

The typical mound has multiple chimneys and tubes that allow air to circulate through the structure. The inner layers of the mound contain galleries in which the termites live and raise young. The king and queen usually live deep inside the mound, where they are well protected from predators and the elements. Some mound-building termites, particularly those in the subfamily Macrotermitinae, are gardeners. They use underground galleries to grow symbiotic fungi.

Termite mounds are strong -- they can survive fires and floods, although water can enter the inner chambers through the ventilation shafts and drown the termites inside. Concealed nests also offer termites protection from weather and predators. But neither type of nest is invulnerable. Animals like aardvarks, anteaters and pangolins have strong claws that allow them to dig into termite nests. Birds, bats, primates and even people also use termites as a food source. This is one reason why termites play an important part in many ecosystems -- they act as food for other animals. Next, we'll take a look at some of the other ways termites benefit ecosystems.

Worker termites often feed larvae regurgitated food, much the way birds feed their young. However, the larvae need to develop the ability to digest cellulose on their own -- they have to be exposed to the organisms that live in termites' digestive tracts. This usually requires the larvae to eat other termites' waste.