Does a deer have exactly enough brains to tan its own hide? 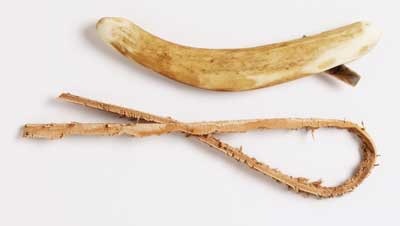 This photograph features a thong made from animal hide and a knife used to cut animal hide.
Dorling Kindersley/Getty Images

Tanning a hide means converting an animal skin from rawhide to leather. But why bother with tanning? If not properly cured, rawhide will quickly decompose and leave you with a putrid set of moccasins. Once tanned, the hide is water-resistant and more durable.

Generally speaking, the major steps of tanning involve removing excess moisture from the animal skin and then replacing it in a process called fat liquoring. Although it may sound like doubling the work, both steps are necessary to preserve the skin and make it wearable. Tanning animal skins has evolved from being a procedure performed by hand to one completed by machines.

Before you get down to the actual tanning process, you must first clean the skin. In primitive times, this involved blades derived from bones or chipped from rocks. When removing the excess flesh and fat, no need for the samurai sword. Slightly duller blades, like those of bone or rock, work best because they don't snag or tear the hide. Most tanning procedures include soaking the skin in a water-based solution for a few hours up to a few weeks in order to loosen the hair. After that, you scrape off what remains.

Now, let's say you're tanning a deer hide. You've done your initial cleaning and it's stretched and dried. As a result, the skin has become stiff. How do you grease up the skin's collagen proteins in order to make it usable? You need a tanning agent, also called tannin.

Warning: Here's where things get gory. Go back to the carcass and grab the deer's brain. Put it in a bucket with some water and heat the mixture. Rub the brain solution on the hide as if you're applying aloe on a sunburn victim. The brain contains oil called lecithin that serves as a natural tanning agent to lubricate the skin. Native Americans first practiced this method of brain tanning and continue to tan hides with it today. Ironically, deer have just enough oil, or lecithin, in their brains to adequately tan their own hides. The same goes for other animals including cows, raccoons and beavers. Once the hide has absorbed the liquid, the skin is smoked in order to seal it.

For those who aren't interested in getting inside an animal's head, you can also obtain tannin from plant sources, such as sumac leaves or bark. There are natural oils in the plant that moisturize collagen proteins to give the skin softness and flexibility. Like brain tanning, this process of bark or vegetable tanning has an extensive history. In fact, colonists brought bark tanning practices with them to the United States [source: Richards].

Brain tanning and vegetable tanning comprise a sliver of the leather tanning that happens today. Instead, more than 90 percent of the tanning performed in the United States is called chrome tanning [source: EPA]. Chrome tanning employs chromium sulfate, a kind of salt, as the tanning agent. Generally, it cures the hide faster than other methods and creates warmer, softer leather [source: EPA]. Many tanning purists, however, maintain that brain tanning leads the herd for superior leather production.