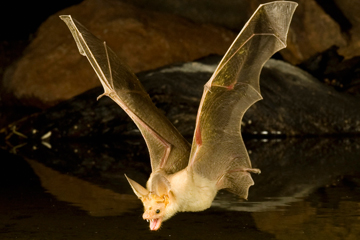 A pallid bat hunts for food above a pond in Arizona.
Danita Delimont/Gallo Images/Getty Images

All creatures living in the wild try to gain an advantage when it comes to finding their next meal. Some animals use size to their advantage, while others rely on speed or the ability to make a threatening sound. Researchers have recently discovered that even the fairly innocent looking bat has a trick that can be used to thwart the hunting attempts of rival bats.

Bats are nocturnal, hunting mainly in the darkness of night. They eat prey that's tiny and quiet, like moths and other insects, which can be difficult to find in low light and darkness. Although the expression "blind as a bat" is widely used, bats aren't blind; they just use a much more reliable means of locating these tiny tidbits of dinner than sight.

When it's time to find food, bats emit a series of high-pitched sounds into the darkness that bounce back when they hit an object. When a bat hears the echoing sound, it knows an object is nearby, and it flies closer to the source of the echo to send out more signals. As the echo-back sound of the increases in intensity, the bat knows it's getting closer to the prey, and he continues emitting signals until he swoops in for the kill. That process of finding a target's location by listening to sonar echoes is called echolocation.

While primarily using sonar to find food, bats can also use their sonar in a hostile and competitive way, according to research from 2014. Wake Forest University researcher William Conner and University of Maryland colleague Aaron Corcoran used audio and video systems to observe the behavior of Mexican free-tailed bats as they hunted for tiger moths, a favorite snack. They found that the bats emitted a specific sound that was successful in interfering with the sonar of other prey-seeking bats of the same species. They called this process sweep jamming. The study concluded that bats emit this sound intentionally to interfere with the sonar of food-seeking companions [source: Yong].

When the researchers played back recordings of the jamming sound to other bats in search of insects, those bats were also thrown off track; the sound made the bats 86 percent more likely to miss their prey target. The scientists experimented with other sounds like white noise, but those didn't interfere with the bats' sonar [source: Corcoran].

In the natural world, sonar and echolocation aren't exclusive to bats -- mammals such as dolphins and other whales also use it to find their way [source: Lewis]. And humans, too, have adapted technology to mimic this process; ships regularly use sonar to help them navigate in dark waters and to explore what's in the water under and around them. Sonar can indicate the presence of another ship, a dangerous obstacle or aquatic life. In warfare, sonar can be lifesaving, clueing a ship in about the presence of a hostile submarine or an enemy torpedo, or jamming the sonar of other ships (just like bats) [source: National Ocean Service].

There's no evidence yet that other animals that use echolocation for hunting use a signal-jamming sound. But bats seem to have perfected the process of jamming one another's signals – all in the search for a better meal.