by Jesslyn Shields Jul 11, 2016
A new study shows that the eyes of cephalopods, like those of these pharaoh cuttlefish (Sepia pharaonis) may be more complex than we previously thought. Helmut Corneli/Getty Images

The class of animals that includes octopuses, squid, nautiluses, and cuttlefish might look like sloppy, oversized latex gloves on land, but in the water these creatures are some of the most graceful and agile in the world. Cephalopods can do a lot of things we can't — like change their skin color instantaneously, or squeeze through a hole the size of a soda can lid. But they're also more similar to humans than we might imagine: their brain-to-body ratio is similar to ours, and with that comes a prodigious intellect that allows them to use tools, open childproof bottles, and engineer elaborate aquarium jailbreaks. They are ancient creatures, and it's been about 700 million years since we shared an ancestor, so almost all the traits we have in common with a cephalopod evolved separately from one another.

Our eyes are one example of this convergent evolution.

"Cephalopods are one of the few animals that have evolved a high-acuity, camera-style eye completely independently from vertebrates," says Alexander Stubbs, a graduate student in the Integrative Biology Department at the University of California Berkeley.

But this never sat well with Stubbs. Why, he wondered, if a cuttlefish saw only in black and white, would the males display such outrageous breeding colors, putting them in danger of being eaten by a predator while showing off for a lady who ostensibly couldn't even see his vivid suit? And besides that, cephalopods are masters of camouflage. It seems strange that an animal that uses color to such virtuosic effect wouldn't be able to see its own handiwork.

So Stubbs teamed up with his father, Christopher Stubbs, an astrophysicist in the Harvard Department of Physics, to prove an idea he had: that cephalopods do detect color, only through a completely different mechanism than our eyes do.

While our eyes have round pupils that shrink and grow in order to bring all available wavelengths of light into a single point of focus, regardless of light conditions, cephalopod pupils come in crazy shapes: vertical bars or dumbbells, fancy scrollwork U's and W's.

"The position of the pupil, the shape of the eyeball and the distance between the pupil and retina constantly change to allow different wavelengths of light to enter at different angles."

If we had cephalopod pupils, the world would look like a hot mess due to a phenomenon called chromatic aberration, which you might have experienced last time you took an out-of-focus picture with your camer,a or went to the ophthalmologist to get your eyes dilated.

To simulate the way cephalopods move their eyes around, Christopher Stubbs used a model he developed in his astrophysics research to see if the animals use chromatic aberration to detect color by collecting wavelengths of light and sorting them out in a different way than vertebrate eyes do. The paper published this week in the Proceedings of the National Academy of Sciences suggests they do this in order to accentuate the effect chromatic aberration has on their vision, not minimize it.

"If these organisms really are using the principles of optical physics to have evolved color vision, that's pretty amazing," says Alexander Stubbs. "Here's this organism that most would argue is the best camouflage artist on the planet, and they're getting that information through a totally different means — it's hard to wrap your head around."

The chambered nautilus (Nautilus belauensis) can change the shape of its eyes to better discern colors.
Reinhard Diershil/Getty Images
Now That's Interesting
Cephalopods are able to camouflage themselves almost instantly with the help of thousands of tiny organs in their skin called chromatophores, little balloons full of pigment that change shape and allow the animal to change color.

The Power of Police, Protesters and Cell Phone Video

It's the Eye of the Tiger… and the Gator, the Deer, the Housecat 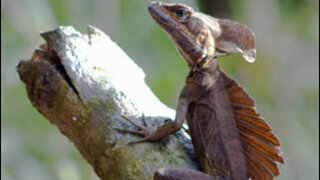