From the growling, clicking and purring sounds they often make when greeting their mate to their highly monogamous nature, there's much more to this distinctive and charismatic marine wildlife creature than its trademark horse-like head, elongated mouth and curly tail.

Among the most interesting bits of info as of late? Seahorse "hotels" — 3-foot-by-3-foot (0.9-meter-by-0.9-meter) boxes consisting of a metal bar frame and chicken wire walls — are being used to boost populations.

One of the first places these artificial structures began cropping up is along the eastern coast of Australia, where Dr. David Harasti, senior marine scientist for fisheries in New South Wales, has built an entire chain of them around Sydney Harbour. Harasti — a member of the IUCN (International Union for Conservation of Nature) Seahorse, Pipefish and Seadragan Specialist Group, and a colleague of the marine conservation organization Project Seahorse — has modeled the hotels after lobster traps to provide abundant gripholds for the seahorse's signature coiled tails.

The purpose of the hotels? To house and breed the country's endangered White's Seahorses (Hippocampus whitei), which have experienced a significant decline during the past 20 years as a result of dwindling natural habitats. The namesake of John White, Surgeon General to the First Fleet, the White's Seahorse (also known as the Sydney Seahorse) is one of four species of seahorses indigenous to the waters of New South Wales.

Harasti is working in conjunction with the SEA LIFE Sydney Aquarium, which breeds the seahorses and raises the babies (known as fry). Once the babies are big enough, they are tagged and released around the seahorse hotels, where they're expected to become permanent residents. If the hotels are successful, they could become common in reefs worldwide.

“Seahorses truly are magical, and we are happy to spread awareness and share knowledge about these fascinating creatures,” says Lily Stanton, Syngnathid Research Biologist at Project Seahorse.

Eager to find out more about these cool little creatures? Here are nine fun facts you might not know, courtesy of Project Seahorse.

1. Seahorses Are a Type of Fish

At first glance, seahorses don't look like a fish due to their unusual anatomical shape and lack of scales. But they actually belong to the class Actinopterygii (bony fish), which includes salmon and swordfish, and the family Syngnathidae (fused-jawed fish), which includes pipefish and seadragons. All seahorses are part of the genus Hippocampus, a combination of the Greek words for "horse" and "sea monster." Seahorses do have many physical traits in common with fish, including swim bladders that keep them buoyant in the water and gills to breathe. Unlike fish, however, seahorses are clad in a strong suit of sturdy armor-like plates and possess a tough, bony structure that makes them difficult for other fish to digest. The result? They don't have many natural predators.

Scientists don't all agree on this number, and in the future, the number could go up or down as more types are discovered, or if seahorses that look quite different from each other are found to belong to the same species. One of the most distinct species is the extremely large Bigbelly seahorse (Hippocampus abdominalis) found only in Australia. With a maximum height of 13.7 inches (35 centimeters), this seahorse towers over all of the other seahorses and has a distinctively large belly that is especially prominent in males. It also has large dark spots on its head and trunk, making it easy to identify. The most distinct group of seahorses, meanwhile, are said to be pygmy seahorses. They are incredibly small (less than an inch, or 2.5 centimeters) and have an amazing ability to blend perfectly into their surroundings, which renders them almost impossible to find.

Seahorses are the slowest-moving of all fish species because the only way they have to propel themselves is by using a tiny fin in the middle of their backs. This single fin can beat back and forth up to 50 times a second, but the size of the fin keeps the seahorse from traveling great distances. Even with small pectoral fins that help them steer, seahorses are known to be so delicate that they can become fatally exhausted when waters get rough during storms. Although they aren't all that durable, seahorses are unique in that they not only can move forward, but also up, down and backward. The shape of their heads also helps them glide through the water almost silently. Combine that with their ability to camouflage into their surroundings, thanks to helpful chromatophores in their skin cells, and seahorses make great hunters with a predatory kill rate of around 90 percent.

Although they struggle when it comes to speed, that doesn't mean this species isn't athletic. Their flexible tails allow them to anchor themselves to coral or seaweed when they need to rest. At times, they've even been known to wrap their tails around their mates so they don't lose one another. This aspect of their anatomy also makes them skilled hitchhikers. They may not be able to travel long distances quickly alone, but linking themselves to floating vegetation can take them to all types of interesting destinations.

Seahorses don't have teeth or even a stomach like other marine species. How do they eat? Instead of a mouth that opens and closes like ours, they have a tube for a snout that they use to suck in all of their food like a vacuum. They eat pretty much anything small enough to fit through their mouth, which primarily is shrimp-like creatures, baby fish and other small organisms. Because they don't have stomachs, they have to constantly eat. They are slow swimmers and don't chase their prey, relying on sneak attacks to catch a meal.

6. Many Seahorses Mate for Life

Lots of seahorses stay with the same partner for one or more breeding seasons. Remaining committed to a single partner enables seahorses to pass through multiple reproduction cycles during each mating season, which heightens the success of continuous procreation over time. Every morning, seahorse couples engage in ritualistic dances to greet each other, moving through intricate, rhythmic sequences of twists and twirls for minutes to hours on end. They engage in these daily dances to strengthen their romantic bond, to ensure their reproductive cycles are properly synced, and to verify each day that their partner is both still fervently committed and alive.

7. Males Take the Lead When It Comes to Childbirth

After holding a complex courting dance during the reproductive cycle, female seahorses place their eggs into an oviduct in the male's body that's housed in what's known as a brood pouch. Once the placement is complete, males settle into an area to rest throughout gestation (which can last up to a number of weeks). When it's finally time to give birth, the fathers go through a series of violent contractions that push out teensy babies like a sprinkler. Each time is different, anywhere from five to 45 minutes. When they are born, baby seahorses are about the size of grains of rice. They also are on their own, spending the first two to three weeks of their lives drifting along in the plankton layer of the ocean. Less than one in a thousand will survive long enough to become an adult due to predators.

8. The Seahorse Is Considered Magical and Lucky in Many Cultures

9. Seahorses Are a Centuries-old Ingredient in Traditional Medicine

Seahorses are prescribed for a lengthy list of conditions, including sore throats, incontinence, broken bones and waning sex drives. There even are texts that describe a magical preparation of seahorse mixed with spiders that allows people to breathe underwater. Although beliefs surrounding the therapeutic benefits of seahorses are rooted deep in the past, they are having a very real impact in the 21st century. Demand for seahorses in traditional medicine is growing like never before, with millions of seahorses caught and sold to the medicine trade each year. Conservation groups are working to make seahorse fishing more sustainable, however, and campaigners are trying to persuade people to seek alternatives to these expensive and endangered ingredients.

Now That's Interesting
Some of the oldest seahorse stories tell of the Greek sea god Poseidon galloping through the oceans on a golden chariot pulled by hippocampus, the beast that was half-horse and half-fish. It's thought ancient Greek fishermen believed the real seahorses they sometimes found tangled in their nets were the offspring of Poseidon's mighty steeds.

Why Countries Use Economic Sanctions to Prevent Conflict 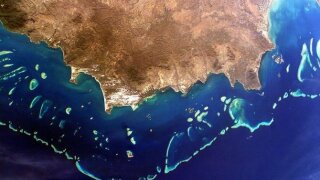 How the Great Barrier Reef Works 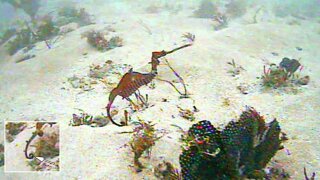 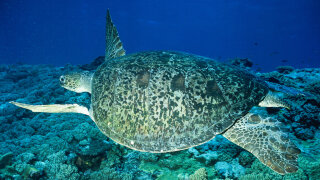 How Websites Use 'Dark Patterns' to Trick You Online
February 24, 2020