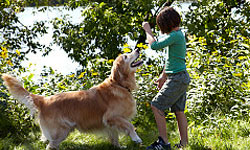 One of the easiest tricks for a child to teach a dog is the canine handshake.
Photodisc/Getty Images

While most dogs love to fetch sticks and play hide and seek, Lassie was different. Anyone who has seen the hit 1950s TV show knows that fetching humans was Lassie's favorite sport, especially when she was dragging Timmy or Paul, Timmy's dad, back to the scene of a catastrophe.

In season 5, episode 21, Uncle Petrie -- who should not be confused with a Nobel Prize laureate -- sees dollar signs when Timmy finds a pool of oil on their land. "Lassie," the geezer sneakily says late at night, "show me where the oil is. I gotta see it with my own eyes."

Lassie, being a dutiful collie, takes the dimwitted uncle to the pond of oil. Tasting the oil isn't enough to convince Uncle Petrie that the liquid is indeed "black gold." For some unfathomable reason, he wades into the muck and starts to sink. "I'm stuck," he tells the dog. "Lassie, you got to go for help. This ought to teach me."

Yes, it should, Lassie thinks. Instead of leaving Uncle Petrie to stew in his own crude, Lassie obediently bounds off to fetch Paul, her tail wagging, her eyes as bright as a black and white television. It turns out the oil came from a busted pipe. No matter. For Lassie, saving the day was tons of fun.

Luckily, making sure your dog has fun doesn't need to be dramatic or dangerous, especially if you have kids. Dogs and kids love to play with one another. After all, even Timmy liked tossing Lassie a stick every now and then. There are many safe and fun games children can play with their four-legged friends. Just remember these safety tips from the American Kennel Club when your children are playing with Fido, or a 21st-century Lassie:

Go to the next page to find out 10 fun games kids and dogs can play together. Fetching humans is not one of them -- although it could be.