by Joy H. Montgomery
NEXT PAGE 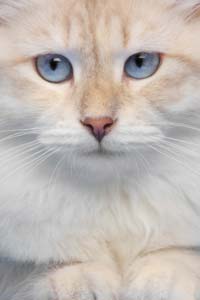 The most popular pets in the country, cats come in all shapes and sizes, including this beautiful long-haired variety. See more pictures of cats.
iStockphoto/Thinkstock

Despite the long-lasting debate between dog loyalists and cat lovers over which species is best, there's no disputing the statistics that prove the cat is America's most popular pet. According to the Humane Society of the United States, more than 38 million homes harbor a cat or two, but exactly where did the feisty feline come from, and what makes it such a favored companion [source: HSUS]?

The origin of cats is perhaps just as much of a mystery as the species itself. Most experts will agree that the cat is a descendant of the African wild cat, but how did it go from wild hunter to domestic pet? We used to think that domestic cats emerged in ancient Egypt more than 3,000 years ago, but recently, experts conducted a study and traced the domestic cat all the way back to the Fertile Crescent, an ancient Asian hot spot of civilization, some 10,000 years ago [source: Scientific American].

Cats may have begun their domestication due to changes in human lifestyle. As nomads turned from hunting to raising their own crops and animals, cats began to prove their usefulness in ridding rodents from grains and became an accepted part of the family. Cats were even used in transoceanic travels to keep grains on board safe from stowaway rats, including Columbus' fateful voyage, which is how the domestic cat arrived in North America. Although cats did assimilate easily into family living, they never became completely domesticated, which is why, even today, cats are pretty self-reliant and still make excellent hunters when allowed to roam free.

Have you ever wondered why cats are so agile? Do they really have night vision? Would you believe a cat's whiskers make a great GPS? And how did the feline become a pop culture phenomenon? If you've ever believed cats are capable of ruling the world, read on to learn everything you'll ever need to know about them.