The owner of this oriental shorthair cat has added personalized flair to its cage at the CFA's International Cat Show.
Justin Sullivan/Getty Images

Do you think dogs get all the glory? Do you admire cats for their superior class and dignity? Have you never forgiven Disney for vilifying Siamese cats in "Lady & the Tramp?" If you think cats have just as much or more of the "right stuff" to strut than dogs, you're not alone. Though they aren't quite as popular and well-known as dog shows, cat shows have a significant and devoted following.

Organizations like the Cat Fanciers' Association (CFA) in the U.S., the Governing Council of the Cat Fancy (GCCF) in U.K. and the International Cat Association (TICA) put on hundreds of different kinds of cat shows each year. Modern cat shows started in London in 1871. In the U.S., the CFA came about by 1906 and has been organizing cat shows ever since. The CFA-Iams Cat Championship, held each year in Madison Square Garden, is the cat version of the Westminster dog show with 325 cats competing. The CFA International Cat Show holds competitions among 850 cats in a different city every year, and more than a thousand compete in GCCF's annual Supreme Cat Show.

Although the structure and rules are similar in some respects, cat and dog shows can be as different as the personalities of cats and dogs themselves. If you ever go to a cat show, you'll probably notice the quirky atmosphere, complete with elaborately decorated and customized cat cages. Cat shows are also usually pretty hectic and noisy events with people screaming out judging numbers and the occasional spooked-cat escape.

So, even if you don't plan to enter your cat into the competition, attending a cat show is a unique and fun experience where you can see beautiful specimens of different breeds and learn more about cats in general. On the next few pages, we'll delve into the world of cat shows. What do cat judges look for and what should you know before entering your cat into competition?

The better this Maine coon conforms to its breed standard, the better it would score in a cat show.
Purestock/Getty Images

Much like dog shows, the judges at cat shows compare cats to their breed standard. Organizations like the CFA establish standards for every cat breed. These standards specify how an ideal cat of a breed would look and act. The more standards a competing cat fulfills, the better it will score. The standards aspire to describe features that draw from the natural style of a breed. But also, judges look for overall balance and proportion in a cat's features, rather than exactly conforming mathematical measurements [source: CFA]. Occasionally, the CFA's breed council will alter breed standards as breeds develop.

You can find standards for all 41 CFA-recognized breeds on the CFA's page on breed standards. Based on CFA's standards, the Maine coon cat should follow these standards, which reflect the cat's endurance for a difficult climate:

Different features have different importance, which is reflected in the point values. For instance, the standards indicate that the head is overall worth 30 points (with the shape worth 15, the ears 10, and the eyes five). Allene Tartagalia, executive director of the CFA, discusses for CNN how temperament also plays an important part in judging cats. If a cat eschews the spotlight, it won't have a very good chance of winning, despite its physical attributes.

Of course, these standards and point values are different for every breed, and at shows that compare all breeds, judges must be familiar with a wide breadth of information to judge different breeds against each other. In this respect, dog and cat shows are very similar. However, unlike dog shows, many cat shows incorporate a household cat category in which cats are not judged by breed standards. Instead, judges critique cats in the household category based on physical condition, beauty, personality (such as playfulness and poise) and show presence [source: Davis]. As you might have guessed, judging household cats on these loose terms can make it harder to be objective.

On the next page, learn how cat show competitors are divided into classes and how your cat could become a champion.

Entering a Cat in a Show

Before you decide to enter your cat into a show, the experts recommend attending shows as a spectator at first. This will allow you to get a good grasp on what's going on and get familiar with the atmosphere. Also, it's a good idea to get a hold of some cat magazines to learn more about the culture and information out there on cats. In addition, certain cat publications will list the schedule of shows.

Making sure your cat is up to the task is tantamount to deciding whether to enter a show. Many cats don't appreciate being handled by strangers in an unfamiliar environment. This could cause your cat undue stress.

If you think your pedigreed cat should compete to be a champion or premier and you don't plan to enter your cat into the household pet category, get a copy of the breed standards for your cat's breed. You can get these from whichever governing organization (such as the CFA) you'd like to register your cat. Get familiar with these standards so that you have a good idea what judges will look for in your cat. Learn how to groom your cat to make it look its best.

Organizations often require that you register your cat with them or an affiliated group before you can exhibit them at a show. Often, requirements stipulate that your cat be healthy and vaccinated before you can show them. Make sure you can get his documentation from your vet. Once you register your cat, you can fill out an entry form to enter a show. Because of deadlines and the time it takes to enter you, make sure you send in this paperwork ahead of time, allowing about two months before the show.

Once you've jumped through all the administrative hoops to get your cat entered and it's finally show time, here are some tips from people experienced in cat shows:

Also, if you must take a flight to the show from out of town, bring your cat on board with you, instead of storing it in cargo space. Cat show experts also warn that getting into the big-time world of competition often requires a significant investment of time and patience. It is not uncommon for owners to spend hours grooming their show cats. In addition, costs of supplies rack up quickly. For instance, show cats might require several expensive combs and brushes for different areas of the body as well as shampoos and various other grooming supplies.

For more information on cat shows and how you can turn your feline into a champion, investigate the links on the next page.

Up Next
'Whisker Fatigue' May Be Causing Your Cat's Grumpiness at Mealtime
If your cat's pawing food out of its bowl to eat, it might be more than an annoying habit. Learn how cats can have whisker fatigue at HowStuffWorks.
Explore More 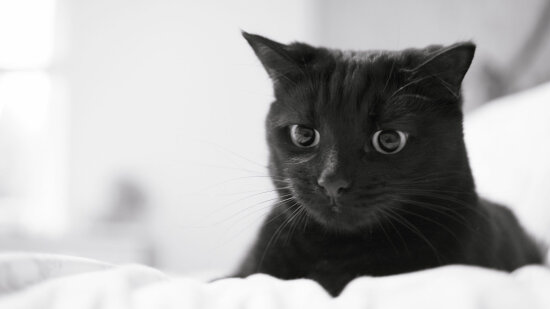 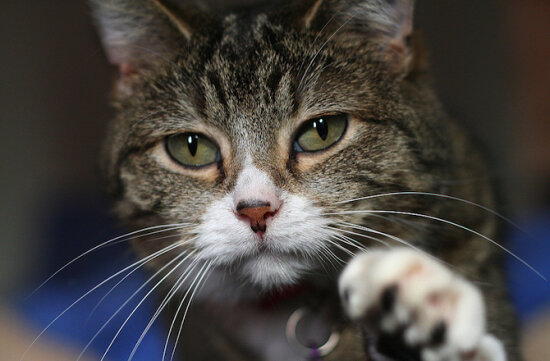 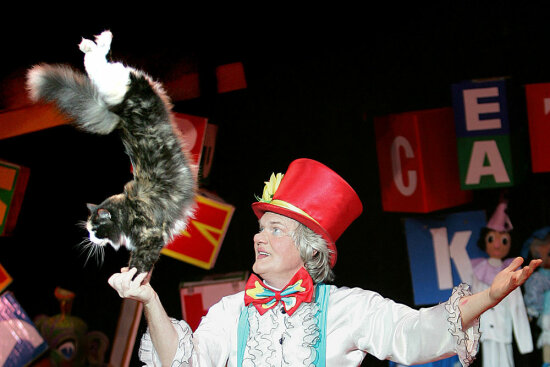 5 Things You Can Train Your Cat to Do (Really)