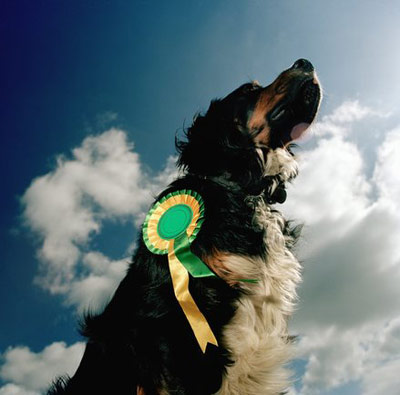 Have you ever run across a dog show as you channel-surfed the TV? If so, you might have wondered what the heck was going on. People in blazers and slacks are jogging dogs around a fully-packed arena in a dignified procession. Over here is a droopy-faced bloodhound, over there a meticulously groomed prancing poodle, and in between a small Maltese dog that your untrained eye almost mistook for a mop. How can judges possibly compare dogs that seem so fundamentally different?

Dog shows, specifically conformation shows, are events in which purebred dogs compete against each other based on their breeds' standards. The American Kennel Club runs Westminster, the most famous show in the U.S., while the U.K. is home to the largest dog show, Crufts. The term conformation refers to a dog's physical attributes, including appearance and body structure [source: AKC]. Conformation shows are popular among dog enthusiasts and those who promote pure breeding of dogs. Many dog shows, including the prestigious Westminster, don't offer big cash prizes to the winners. In fact, the dog show process can be quite expensive for dog handlers, considering the costs of dog care and travel. But after more than a century, dog shows remain a popular tradition. In 2008, about 3.4 million people watched thousands of dogs compete for Best in Show at Westminster [source: Sandomir].

­So what exactly transpires at a dog show, and why do some critics so vehemently oppose these competitions? Keep reading to learn how Fido becomes a champion dog.