Other Kinds of Dog Shows 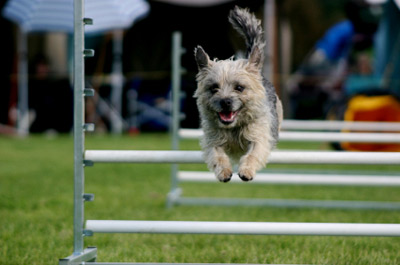 When most people think of dog shows, they think of conformation shows, like Westminster. But there are many other kinds of dog shows besides conformation competitions, though they might not get as much media attention. Two of the most common are agility trials and obedience trials.

Agility trials involve several obstacles in which the dog performs various tasks, including jumping over poles, running through tunnels and weaving through posts. Judges decide what order the dogs must go through each task and show the handlers in advance. Then, without a leash, the handler leads the dog through the course, letting it know where to go next. Meanwhile, the judges time how long it takes the dogs to complete the trial and deduct points for any faults. The judge marks a fault for every second the dog takes in excess of the standard course time or for committing a course penalty. Without faults, a dog will score a perfect 100. Dogs compete in agility trials to advance and earn various titles. Like conformations, these competitions can be specialty, group or all-breed trials [source: AKC].

In obedience trials, dogs must follow exercises by taking commands from their handlers. The AKC regulates these exercises and judges award points based on those regulations. The difficulty of these tasks depends on the level at which the dog is competing. Levels include novice, open and utility. For instance, a dog must be able to follow beside its handler while keeping the same speed, as well as stand and sit for extended periods. More advanced exercises include performing jumps, retrieving items and distinguishing its handler's scent on items. In another task, the dog must obediently follow its handler's hand signals without any verbal cues. Obedience competitions include all-breed obedience trials and specialty trials, and dogs can aspire to various championship titles, the highest being National Obedience Champion [source: AKC].

The AKC also regulates various other kinds of dog competitions, including field tests, lure coursing, hunting tests and herding tests, among others.

Perhaps now that you know more about dog shows, you can impress your friends during the next Westminster show with comments like "That dog is an excellent specimen of the clumber spaniel" and "Did you notice the graceful gait of that Finnish spitz?" To learn more about dogs, including those dog heroes charged with search-and-rescue, guiding and policing duties, investigate the links below.

The AKC also organizes the AKC/Eukanuba National Championship, an annual show that invites international dogs to compete. The show is televised by Animal Planet. In addition to Best in Show, the AKC gives out awards to people, including the Breeder of the Year Award and the Lifetime Achievement Award. Also, five dogs can get Awards for Canine Excellence (ACE) in the categories of: