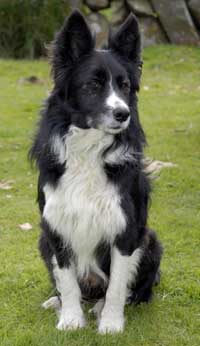 The border collie was originally bred on the Scottish/English border, as the name implies.
Alfredo Sosa/The Christian Science Monitor/Getty Images

At first glance, conformation competitions seem like innocent fun generated by people with a genuine love and enthusiasm for dogs. However, some critics have lodged impassioned complaints or even disapprove of the whole system. What is it about dog shows that have these critics up in arms?

Particularly, the shows' insistence on exclusively purebred dogs and dogs' aesthetic qualities has brought up issues about the ethics of breeding. To produce winning show dogs, breeders try to breed dogs with these specific physical attributes, which means narrowing the gene pool for those kinds of dogs. In this way, breeding for physical attributes can lead to inbreeding and consequently, dogs with weaker immune systems and birth defects [source: Pitcairn]. Many border collie groups, such as the American Border Collie Association (ABCA), felt so strongly about the potential for unethical breeding that they did not want the AKC to recognize their breed. Despite these efforts, the AKC elevated border collies to the herding group in 1995. [source: Devine]. Now, before owners can register show dogs with the ABCA, the dogs must pass a working test [source: Devine].

People for the Ethical Treatment of Animals (PETA) have also held issue with aspects of the Westminster show. Particularly, they object to the practice of tail-docking, or amputation, which is done to adhere to some breeds' standards. PETA filed an official complaint against the Westminster Kennel Club in 2004, claiming that its support of tail-docking violated New York state laws against inhumane procedures on dogs [source: PETA].

Writer Jonah Goldberg argues that the popularity of dog breeding helped spur the eugenics movement of the early 20th century and he notes the ethical problems with both breeding and eugenics [source: Goldberg]. Goldberg goes on to point out how conformation shows like Westminster are merely shallow beauty pageants in which only aesthetic standards matter. To show a genuine appreciation of the breeds, he suggests, dogs would compete by carrying out the practical duties their breeds were developed to do. For instance, if a hound wants to demonstrate that he is the best example of his breed, he would have to prove his hunting skills.

On the other hand, some critics believe shows like the U.K.'s Crufts, which has brought an agility competition into its show, have departed from the original purpose and need to bring the focus back to the traditional roots of conformation. Paul Keevil was a press officer for the British & Irish Dog Breeds Preservation Trust until he spoke about his disapproval of how Crufts has changed [source: Lyall]. Though flashy dog events, such as agility, fly ball and obedience competitions, draw a bigger audience, Keevil expressed his wish that Crufts retreat back to an emphasis on simple conformation competitions.

Of course, if these prestigious conformation shows aren't exactly your cup of tea and you seek more performance-based competitions, there are many out there to choose from. On the next page, we'll learn about what's involved in agility and obedience trials.

For those mixed dogs that feel left out of all the fun, England's Kennel Club, which runs Crufts, has organized a dog show for crossbreed dogs. Scruffts, as it's called, is a family friendly competition that welcomes all non-purebred dogs to compete. Because no standards exist for crossbreeds, the criteria are very general. According to the Scruffts website, judges look for good character, health and temperament to find the best crossbreed dog.