Dog Show Awards: Becoming a Champion and Best of Breed 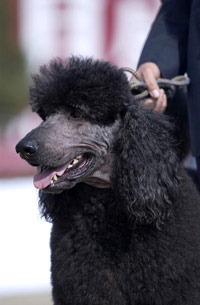 If you're new to the dog show process, it can seem confusing. But after going over the steps in order, it will make more sense.

To become designated a champion, a dog must win a certain number of points, which it can earn from different dog show competitions. A dog becomes a champion after it gains at least 15 points from three different judges and gains at least two major wins from separate judges. A major win is one in which the dog earns three, four or five points. Reaching the level of champion offers the dog the privilege of attaching the prefix "ch." to its name.

So how exactly do dogs go about earning these points? The process begins with specialty shows that focus on a particular breed. Specialty competitions separate the dogs into male and female groups and then separate them into six different classes:

With the males going first, the judges inspect each of these classes individually, and award ribbons for first through fourth place. At this stage, first-place winners do not get any points. First-place winners from the male classes then come together to compete for Winners Dog. Females then go through this same process and then compete for Winners Bitch. The Reserve Winners Award goes to the runners up for Winners Dog and Winners Bitch. Only Winners Dog and Winners Bitch get points. However, the number of points awarded varies and depends on how many dogs of its sex competed in the show. This means that the more dogs it defeated, the greater the point-reward (with five being the highest).

But wait; the competition doesn't stop there. Next comes the award for Best of Breed. Dogs that have earned the points necessary to be champions can enter this race with the Winners Dog and Winners Bitch. After judges award Best of Breed, they give out an award for Best of Winners, which is only between the Winners Dog and Winners Bitch. Finally, the judges determine the Best of Opposite Sex, which is for the best dog of the opposite sex of the Best of Breed. A dog can actually earn extra points during these awards, depending on the number of dogs of its sex and champions that were competing against it.

Afterwards, the Best of Breed winner can advance to a group show. Next, we'll talk about what those groups shows are and learn about the Super Bowl of U.S. dog shows, Westminster.