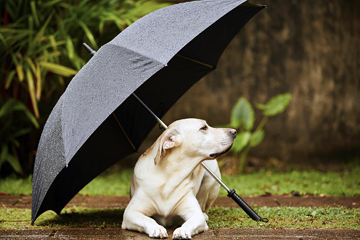 We know dogs (and other animals) have a better sense of hearing and smell, but are they also better at sensing the weather?
Chalabala/Thinkstock

If you grew up in my household, you would not need to read this article. That's because you would know — as undisputed fact — that dogs (and cats and birds and rats) can sense a stormy forecast, mostly because a certain matriarchal figure in the household would not let you forget it. Every time the dog whined endlessly or the cats careened through hallways pursued by imaginary attackers, my mother would sigh heavily and declare that the weather must be changing. Seeing that we lived in the Pacific Northwest — where storms happen regularly — and that our pets were traditionally just shy of wild, my mother could often claim accuracy on her predictions.

But were my mother's prognostications coincidence or did she have a decent idea brewing? Many have claimed that animals — especially dogs — can sense storms coming, and it's not always just people making excuses for their golden retriever's bad behavior. Now, some of the hypotheses for dog behavioral changes aren't crazy at all. They're based on biological differences between dogs and humans that certainly could give canines the upper hand in predicting storms — or even impending disaster.

As most of us know, dogs do have a "better" sense of hearing than people, meaning that they can hear much higher and lower frequencies than we can. And some posit that dogs can hear that distant, low rumbling of thunder before people do, alerting their owners to an approaching storm. Likewise, while we don't know exactly how much better dogs are at detecting odors than humans, we do know they can detect smells in much greater detail, having 20 times more scent receptor cells. It stands to reason that if humans can "smell" an approaching rain, then dogs can too — and much sooner than a human. There's even some idea that dogs — like many other animals — will respond to changes in barometric pressure. So if you're seeing a dog behaving strangely, it could certainly be its response to a low-pressure system moving in [source: Pedigree; Alice].

But while these are all certainly intriguing ideas, there isn't enough strong, evidence-based research to give this theory a firm thumbs-up. We should also make it clear that no scientist or researcher is arguing that dogs (or animals in general) have some sort of telepathic ability either to foresee a forecast. There is no reason to think that animals are doing anything other than using their biology to react appropriately to warning signs [source: Nature].

Some researchers, however, do think that animals can at least sense early warnings — like subtle tremors before larger earthquakes — before humans. And by picking up these cues, they might be making an altogether reasonable decision to flee the area. Running to a forest, for instance, is instinctual to an animal looking for cover. No sixth sense necessary, in other words.