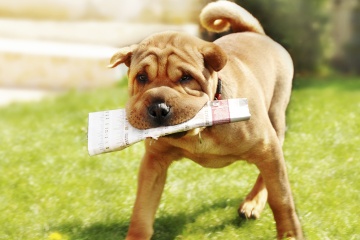 The saying, "You can't teach an old dog new tricks," is used to explain everything from an older dog's unwillingness to sit and stay to a middle-aged human's unwillingness to try new things. The good news is, older dogs can learn using the exact same training methods used to train puppies, and in some ways, training older dogs may be even easier than working with an excitable young dog [source: Saling].

On a 2007 episode of Mythbusters, stars Adam Savage and Jamie Hyneman set out to test the theory that old dogs are too set in their ways to learn new tricks. After just a week of working with a pair of seven-year-old Alaskan Malamutes, Savage and Hyneman flat-out busted this long-held belief by teaching the dogs to sit, stay, lie down, heel and even shake hands [source: Discovery].

If Mythbusters made it look so easy, how did this myth take hold in the first place? It could be attributed to the fact that training an older dog often takes longer than training a young one because you first need to help the dog unlearn undesirable habits [source: The Association of Professional Dog Trainers]. Remember, an older dogs has years of practice doing things the "wrong" way, so it can take time and patience to help him break bad habits and replace them with new ones. Despite the effort involved, people training older dogs do enjoy some perks – namely the fact that older dogs are calmer and better able to focus on the work at hand than a playful new puppy.

Of course, not every old dog can learn new tricks. Dogs with physical limitations may struggle to perform even basic tasks, and those with cognitive issues, such as dementia, are unlikely to have the ability to pick up new concepts [source: Saling]. While this may not seem like it applies to your seemingly young dog, keep in mind that canines reach their geriatric years between the ages of six and seven depending on size, and may have more limitations than you realize [source: American Veterinary Medical Association].

If your dog is in good health, use tried-and-true treats or reward systems to train him the way you would a puppy. There's no need to reinvent the wheel when working with an older dog, as trainers use the same methods regardless of the age of the dog. If you find yourself struggling to teach an old dog new tricks, consider whether it's your lack of patience that's holding him back rather than his own inability to learn.