You may have met a furry Ace, Bandit, Jack or Sparky. You may have even met a Bella, Max or Cinnamon but the chance of being introduced to Fido are much, much lower. These days Fido doesn't even make the top 100, but the once-popular name for male dogs has become a generic shorthand for "dog" itself, much like Kleenex has for tissues or Dumpster has for large trash bins.

So just why is the dog name Fido such a part of the American lexicon? The credit goes to Abraham Lincoln, America's 16th president. While he was still a pre-commander-in-chief and still living in Springfield, Illinois, Lincoln's household included several dogs and cats. Lincoln's law partner, William Herndon, wrote about the dog's role in Lincoln's life, musing about Honest Abe that "if exhausted from severe and long-continued thought ... he would get down with a little dog or kitten to recover."

Before moving to the White House, the Lincoln family allegedly had several photographic portraits made of their beloved dog Fido, though historical research calls the timeline specifics into doubt.
nostri-imago/Flickr/CC BY 2.0

One particularly therapeutic dog was Fido, a mixed-breed dog of yellow hue whose name is Latin for "faithful." Fido became Lincoln's near-constant companion about five years before the then-lawyer became president. According to the Presidential Pet Museum, Fido enjoyed scraps from Lincoln's plate at meals, patiently waited outside the barber shop or any other establishment Lincoln patronized, and generally became well known as a good-natured "dog around town."

In 1863, as he prepared to move to the White House, it became apparent that Fido was a little too friendly, and perhaps ill-mannered, for high office. (A 1954 profile of Fido published in Life magazine called him a "frisky mongrel.") The Lincolns also worried that the bustle and noise of life in Washington, D.C., might upset the dog. Upon moving to the White House, the Lincolns welcomed a dog named Jip, as well as goats named Nanny and Nanko, into their lives.

To ensure Fido had a good life back in Springfield, Lincoln decided to have John Roll, a local carpenter, and his family take care of Fido, leaving them detailed instructions for the dog's proper care and spoiling. Fido was never to be chided for having muddy paws in the house and he was to be given scraps from the table at mealtime. Lincoln even gave the Roll family a couch he built himself; an outsized sofa custom-made to accommodate the 6'4" lawyer, it was Fido's favorite couch to sleep on. And to help soothe the sense of loss his sons — and presumably, he himself — felt, Lincoln had Fido's formal portrait taken with the relatively new photographic technology.

A vintage Civil War-era print shows Abraham Lincoln pictured in front of his former Illinois home, riding on horseback as a crowd cheers. The inscription reads: "Abraham Lincoln's Return Home, After His Successful Campaign For The Presidency Of The United States, In October, 1860."
John Parrot/Stocktrek Images/Getty Images

(Or so the story goes. Historian Dr. James Cornelius, the curator of the Abraham Lincoln Collection at the Abraham Lincoln Presidential Library and Museum, uses local historical research to call into question the date Fido's portrait was actually taken, and points to the Life magazine profile as the first mention of that specific motivation for the picture's creation.)

Regardless of its provenance, the photo made its way into numerous newspaper and, shortly thereafter, Fido — both the dog and the name — skyrocketed in popularity. The name's meteoric rise continued during Lincoln's presidency and was further fueled by his assassination in 1865. As mourners flocked to Springfield for the president's funeral, Roll returned to Lincoln's home with Fido and let the mourning public meet the dog. One person later wrote that petting Abraham Lincoln's former companion "brought me comfort in this time of grief, as touching this dog must have brought the President comfort during his life."

Just as Fido's master was killed by another man, so too did Fido meet an unfortunate end at the hands of another. In 1866, a year after Lincoln's assassination, Fido — ever the trusting and people-loving dog — came across a man apparently sleeping on a sidewalk. Fido started to lick the man's face, which prompted the man, who was drunk at the time, to awaken, panic and pull a knife at the sight of the dog's mouth so close to his face, stabbing Fido in self-defense.

With the popularity of the name peaking in the late 1800s, Fido made its way into the public consciousness during an era when mass media was taking hold in the country, and remained there for years to come. While Fido met a tragic end, his name lives on in popular culture, signifying the Platonic ideal of a friendly, faithful pooch.

Now That's Interesting
Over the years, the presidential residents of 1600 Pennsylvania Ave. have kept all sorts of pets in the White House, from bears and horses to hyenas, sheep and, allegedly, even alligators. 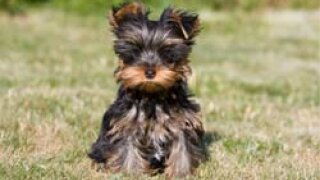 How to Choose Your Pet's Name 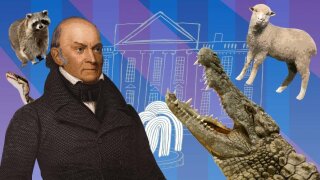 Ridiculous History: Bears, Raccoons — and Alligators? — in the White House 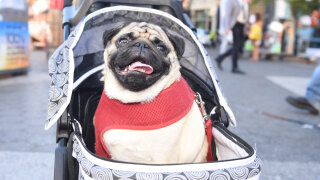