by Alia Hoyt Dec 11, 2019
Goldfish are pretty easy to care for, but they don't do well in the standard 1-gallon bowl. It's too small for them and gets dirty easily. Jessica Holden Photography/Getty Images

What was your first pet? Chances are it was some kind of fish, probably a goldfish. So, what makes them so attractive for novice pet owners? Grant Lord, owner of the site About Goldfish, and author of the e-book of the same name, knows a few reasons: "They can be purchased for very little money; cost of care is extremely low; and goldfish don't annoy the neighbors!" he says via email.

Some people find fish to be a bit boring, since they can't exactly fetch a ball or curl up on your lap. But Lord says we have it wrong. "Goldfish interact with their owners, especially at feeding time, and can be trained to accept food from the hand."

Still, anyone who's ever seen a pet fish go belly-up might be a bit skittish about going down that waterway. Fortunately, there are some easy tricks to keeping our friends with fins happy and healthy.

Know What Kind of Goldfish You Have

A lot of modern-day pets were intentionally bred to suit a specific taste or function, and the goldfish is no exception. Goldfish originated in China more than 1,700 years ago, as an orange-yellow version of the standard carp. They were so pretty that people refrained from eating them, and instead put them on display in ponds and gardens.

Over the centuries, goldfish enthusiasts bred them with other fish like koi to produce more types of goldfish, with hundreds of breeds around today. Some are slim-bodied, which are fast, strong and can get really big. Other types are speckled or have huge eyes. Double-tailed (also known as "fancy" or "egg-shaped") goldfish are the more visually impressive, as they have two fan-shaped tail fins, where other goldfish have just one.

The common goldfish (Carassius auratus), is a good breed for beginners, as they are exceptionally tough and need less devoted attention than some other breeds.

Although it can be pretty to mix goldfish with other fish in your tank, make sure you aren't putting predators and prey together.
tunart/Getty Images

Care and Feeding of Goldfish

When properly cared for, fancy goldfish can live five to 10 years, whereas others like comet and common goldfish can last decades. However most goldfish don't last more than a couple of years, or even a few weeks. That's not because they can't, but rather because of their living conditions.

Here's why. Most people buy a new fish and then chuck it straight in a tank with others, but that's ill-advised, as new fish often bring parasites home with them. "Most purchased goldfish aren't quarantined before they are introduced into their new home," Lord says. "They must be treated for parasites whether they are showing signs of infestation or not."

Fortunately, treatment is easy and inexpensive. Simply keep the goldfish in a solution of 1 tablespoon of un-iodized salt per gallon of water (or 3 grams per liter) for about two weeks before returning it to fresh water. That will take care of any parasites.

Other than that, Lord says that goldfish only have three basic care requirements:

Clean, fresh water. Water should be changed often. "Poor water conditions cause most of the illnesses/deaths of goldfish. These can be bacterial or fungal," Lord explains, adding that poor water conditions are usually caused by uneaten food polluting the water or lack of water changes. "Just because water is clean and clear doesn't mean it isn't polluted by contaminants," he notes.

Changing the water frequently regulates the pH level (which Lord refers to as "the invisible killer"); controls algae growth by removing nutrients; clears sediment buildup from the water and eliminates growth-limiting hormones. Lord suggests using a multi-purpose test kit to determine if a partial water change is necessary. A pH outside of 7.0, an ammonia level above zero or a nitrate level over 20 parts per million indicates at least a partial water change is necessary. The ideal pH level is 7.4.

And don't use a 1-gallon (3.7 liter) bowl for your fish, as it gets dirty faster than a bigger tank and makes your goldfish unhealthy.

A varied menu. Sure, goldfish can subsist on those sorry little dry flakes, but they have a more sophisticated palate than that. In fact, goldfish that eat only dry food won't be as colorful or grow as fast as those that enjoy live foods, as well. Live foods can include various types of worms, mosquito wrigglers (larvae) and daphnia (a type of plankton). If you don't have access to those, try freeze-dried, frozen or gel foods. You should also give your goldfish vegetable matter, like shelled cooked peas, kale and spinach, says Lord. These are "good sources for roughage to avoid digestive problems."

Room to grow. Goldfish need more than just a plain old fishbowl to live. "As an aquarium fish goldfish are a large species that can exceed 300 millimeters [11.8 inches] in body length," Lord says. As such, they need a tank that will accommodate them. He suggests a 15 gallon (56-liter) aquarium if indoors. Although a filter is necessary, a tank heater is not, as goldfish can live in cold water. Outdoor ponds need to be at least 80 to 100 gallons (302 to 378 liters) to suffice.

Other than that, you can keep them solo or in groups. "Goldfish form loose social groups in the wild, and will congregate together when under stress," Lord says. "I keep them in groups and singly, and I don't see much difference in their behaviors except those kept alone tend to interact with me more closely." But do make sure to steer clear of aquariums with other types of fish because goldfish will happily chow down on smaller fish.

Now That's Interesting
There are four types of goldfish eyes: normal, telescopic (Moors), fluid sacs underneath the eyes (Water Bubble Eyes) and upward-facing (Celestials). Never mix normal-eyed goldfish with any of the others because they're faster and will eat all the food first.

Why Does the 'Dirty Dancing' Lake Keep Draining?

It Takes a DJ: Healthy Reef Sounds May Lure Fish to Damaged Reefs 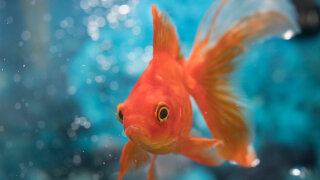 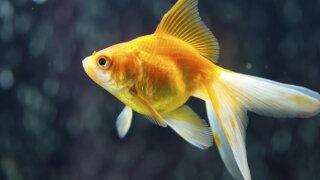 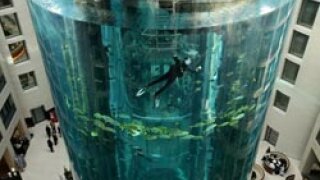 How to Clean a Fish Tank