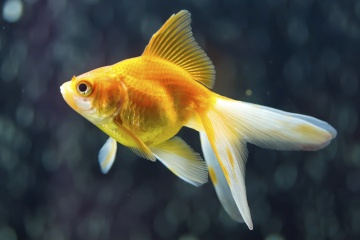 Goldfish are small animals but could they be holding large memories inside their brains?
Laures/Thinkstock

Captive goldfish are not exactly the most cherished of our house pets. We loudly tap on their windows without caring, we forget to clean house (and when we do, they're subjected to a traumatic visit to and from the stopped-up kitchen sink) and when they eventually perish, we unceremoniously flush them down the toilet. This is not how we would treat Rover.

One of the justifications people use when they neglect their yellow friends is that the goldfish don't remember a thing about the abuse they suffer. Many have heard -- and confidently repeat -- that goldfish have abysmal memories. Three seconds, perhaps -- enough so that they've forgotten where they are during one spin around the glass bowl. But is this really the case? Surely goldfish are not constantly delighted (or dismayed) to find themselves, once again, coming upon the looming castle on their horizon?

It appears to be a myth after all. To prove it, let's examine one study that tells us a few different things about how much fish in general can remember. The first experiment was done at Israel's Technion Institute of Technology, where scientists spent a month conditioning fish to respond to an underwater bell that signaled food [source: Siegel-Itzkovich]. After being released into the sea to grow, they were rounded up -- five months later -- using the signal [source: Simpson]. Not only did this show that the fish were susceptible to conditioning, but also that their memories could last for months.

But what about goldfish, specifically? Researchers at Plymouth University were interested to see what goldfish were capable of learning and remembering. So first things first: The goldfish could be taught to push a lever for food (which is cool enough for a creature we all assumed wasn't operating on much). But it gets better: Over the course of three months, the scientists made the lever functional for only one hour of the day. Instead of the goldfish swimming to it over and over to get nothing in return, they found that they adapted to pushing the lever far less frequently during times when food wasn't forthcoming. Even more, they swarmed the lever right before the hour came up, indicating that they remembered a meal was imminent [source: Standard].

Another study, conducted by researchers at Queen's University Belfast, showed that goldfish would avoid a part of their tank if they'd received electric shocks there in the previous 24 hours, implying that they remembered the location of the pain they felt [source: Highfield]. So give Goldie a break, and treat her well.