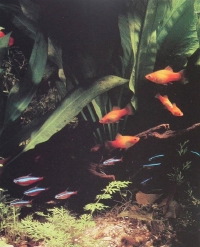 New hobbyists who have had problems keeping fish alive for even a few months are always shocked to find out that the normal life span of the typical aquarium fish is measured not in months but in years.

Although it varies from species to species, aquarium fish should live anywhere from three to seven years, or longer. Goldfish can live for 20 years or more.

Fish can actually live longer, healthier lives and sometimes even grow larger in an aquarium than they do in the wild.

In nature, a fish's food supplies come and go with the changing of the seasons and unusual weather patterns. The amount of food may be limited, and it often takes a lot of energy to find enough to survive.

Predators, including other fish, will keep nearly all the young of any species from reaching adulthood.

Few fish get to die of old age in the wild. Fish that are too weak or slow will quickly become dinner.

Although aquariums have limitations, they can be an environment where fish are able to flourish.

Learn about the proper way to feed your aquarium fish on the next page. 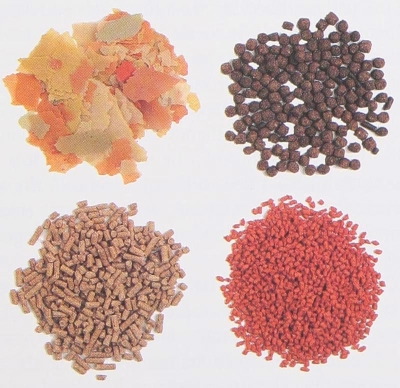 One of the three rules of fishkeeping is to not overfeed the fish. All uneaten food in a tank quickly pollutes the water. Overfeeding kills the fish with kindness. The best guideline is to feed only enough food each time for the to fish finish it within five minutes.

Most fish will do well on a diet consisting primarily of dry flake food. Use only brand-name, high-quality food. There is a wide variety of flake foods, and it is best to purchase several kinds and feed a different one each time. This helps ensure a more balanced diet for the fish.

Larger fish and many catfish will do better on pellet foods, which have more bulk. Freeze-dried foods are particularly good for fish that need a lot of protein. By occasionally offering fresh-frozen or live foods, you will ensure that your fish are getting a nutritionally complete diet.

When shopping for food, remember that commercial foods have a limited shelf life. If the containers are dusty or look like they have been on the shelf a long time, go somewhere else.

Purchase small containers. Yes, it is more economical to buy larger sizes, but once the containers are opened, the nutritional value of the food will begin to deteriorate.

Within three to six months, less than half the original nutritional value remains. For this reason, do not buy bulk-packed flake foods unless you have enough fish to consume it within a few months.

For vegetarian fish, there are flake foods that are formulated to provide much more vegetable material and less protein. Flake foods can be supplemented with freeze-dried, frozen, and even live foods, all of which are available at the aquarium store.

Many hobbyists keep small catfish in their tanks to eat excess food that falls to the bottom of the tank. These fish must receive the same quantity and quality of food as the rest of the residents.

Because they feed at the bottom of the tank, it is best to feed them just before turning off the tank lights. The catfish will feed in the dark while the other fish are resting. Heavy pellet foods sink and work especially well for this purpose.

Healthy fish can go for at least one or two weeks without eating. When you leave on vacation for a week or so, don't worry about not feeding the fish. More fish have probably died from severe water pollution as a result of well-meaning friends or neighbors overfeeding the fish than ever suffered from not eating for a week.

Learn about common aquarium fish diseases in our final section. 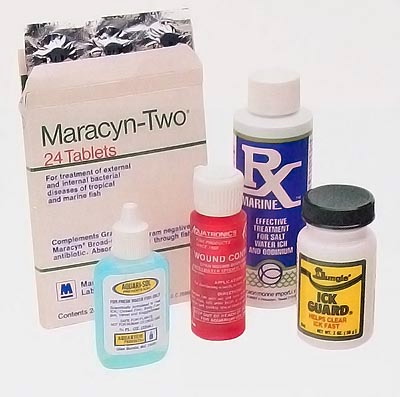 Preventing disease from your aquarium fish is easier than curing it.
©2007 Publications International, Ltd.

Diagnosing and treating aquarium fish diseases is so complex that entire books have been written on the subject. Fish can contract a great many illnesses, and curing them can take a great deal of knowledge and effort. In addition, preventing disease is almost always easier than curing it.

Fish that live in good-quality water, receive a balanced diet, and do not continually suffer from physical stress seldom get sick. Their immune systems are quite capable of protecting them from disease-causing organisms, which are always in the water. When they do get sick, though, it always helps to notice their condition early.

As a general rule, changes in the physical appearance and behavior of the fish are indicators of other problems, so it pays to observe your fish carefully. If any of these characteristics look suspicious, test the water to make sure there are no problems there. As a precaution, clean the filter and change a third of the water in the tank.

When you suspect that any of the fish may be sick, do not add any medications to the tank. You should not treat the tank without knowing what the fish is suffering from. Many fish medications are ineffective or contain so little medication that they do no good at all.

Antibiotics in particular are a problem. If used in small amounts, the bacteria they are supposed to kill can develop resistance to the drugs. When used at much higher doses, the nitrifying bacteria in the biological filter can be wiped out.

Most medications include instructions to change some of the water before each dose. As often as not, it is the water changes, not the medication, that are responsible for the fish getting better.

One common but easily cured disease is ich, which is caused by a parasite, Ichthyophthirius multifillis. This disease is typically brought on by physical stress, such as the fish being handled or the temperature of the water changing rapidly.

The fish's body and fins will be covered with very small white spots. Fortunately, ich can be cured easily by raising the water temperature to about 84º Fahrenheit and treating with the proper medication.

Avoid medications with copper in them. Copper can build up in an aquarium and then suddenly be released if the water chemistry changes, killing the fish. Copper is particularly dangerous in tanks with soft water.

Another common disease is fin rot. This disease results in the edges of the fins taking on an uneven appearance as they get shorter and shorter. This disease, which often results from poor environmental conditions, is easily treated with many of the medications available just for this purpose.

One other somewhat common disease is fungus -- typically a fuzzy, white cottony patch. This is a secondary disease, taking hold at the site of a physical injury. If the water quality is poor, fungus can infiltrate the wound. This problem is also easily cured with the proper medication. Ask your dealer for advice.

5 Tips for Walking Your Dog Safely
Can owning a pet help you live longer?
5 Alternatives to Pet Boarding