How to Care for a Cat

How to Cat-Proof Your Home 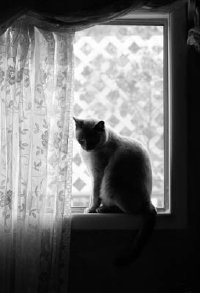 ©2006 Publications International, Ltd. Draperies are an open invitation for cats to play.

We all know to keep dangerous substances away from children, and it's important to remember that we should be even more careful with cats. We all know the old saying about what curiosity did to the cat. Because they are smaller, more mobile, and have more sensitive noses than children, cats are more likely to investigate, getting into things that can be dangerous. To prevent your cat's curiosity from becoming fatal, there are a few household dangers to look out for.

Drapery, blind, and electrical cords. To your cat's eye, the dangling end of a drapery or blind cord is an open invitation to play -- and possibly to disaster. Even just crawling between drapes or blinds and the window (an all-time favorite feline pastime) can land Tabby in a tangle. Cats who get caught in the loops of pull-cords panic. At the very least, the blinds or drapery rod will come down with a crash. At worst, a cat can strangle, do fatal internal damage, or actually get so worked up that his heart gives out. For maximum safety, tie or wrap all window cords well out of feline reach.

Electrical and telephone cords pose something of a tangling threat but more often are dangerous on account of chewing. It might be the taste or texture of the plastic coating, but for some reason, a lot of cats can't resist nibbling. There's not much direct danger in chewing phone cords (except when you try to make a call on a line that's been put out of commission by your cat) since there's very little current running through them.

Electrical cords are another story altogether, of course. Wherever possible, run the cords under rugs and carpets or behind furniture that sits flush to the floor and wall. If a cord has to be run where a cat can reach it, buy some inexpensive plastic conduit, which is available at most hardware and building supply stores. For a larger investment, you can get flat strips of heavy-duty vinyl that not only protect the electrical cords, but also keep the cords flush to the floor to prevent tripping.

Occasionally, a very determined cat will make his way through all the physical barriers. Treating the cords with a bad-tasting substance like bitter apple might do the trick. A little behavior modification, using positive reinforcement, will help, too.

Cleaning fluids, antifreeze, and other poisons. We don't just buy cleaners to get our house clean; we want it disinfected and smelling nice, too. Unfortunately, some of the very products we buy to sanitize and deodorize pet areas are outright dangerous for your cat.

Pine-based cleaners and those containing phenol (the most popular being Lysol disinfectant) are particularly toxic to cats and shouldn't be used on food bowls or in pet areas, sleeping quarters, or litter boxes. Of course, any cleaning compound can be poisonous if taken internally, so keep everything secured in a locking cabinet. (A simple spring latch won't keep a determinedly curious cat out.)

Ethylene glycol is the stuff that makes antifreeze work. It just so happens that it also smells and tastes very sweet. A significant number of cats and dogs -- and even small children -- suffer from ethylene glycol poisoning every winter. Because it's present in large amounts in almost every home and is often very fatal if swallowed, antifreeze and other products containing ethylene glycol should be considered dangerous and never left where pets or children can get to them.

Cats who go outdoors run the added risk of lapping up antifreeze spills and drips, an especially tempting thing for a thirsty cat to do since those puddles of tasty liquid don't freeze on cold days. You can protect your own cat (and other outdoor cats and strays) by immediately cleaning up and washing down any of your own spills or drips, or you can purchase one of the new nontoxic brands of antifreeze that contain propylene glycol rather than ethylene glycol. It's important to also keep in mind that once your cat leaves your property, there's no guarantee that everyone else in the area is going to be equally careful.

Poisonous plants. A cat chewing on your houseplants is more than an annoyance, it can be dangerous or even fatal to the cat.

Dieffenbachia is a fairly common houseplant that also goes by the name of "dumb cane." The dumb cane is aptly named. Chewing dieffenbachia can actually paralyze your cat's mouth, making it impossible for him to eat and drink. The name "dumb cane" comes from the most noticeable effect of this paralysis on people: They can't talk.

Poinsettias (Christmas flowers) belong to the nightshade family -- flowers notorious in fact and literature for their deadly properties. A study a few years back seemed to show that poinsettias -- long believed to be dangerously toxic to cats and dogs -- don't make cats any sicker than many plants considered nonpoisonous. Still, it's always safest to keep cats away from any houseplant, just to be sure.

Windows, balconies, and screens. "High-rise syndrome" might sound like some sort of pop psychology explanation for violent crime, but it actually describes an epidemic that hits a number of cats every year, especially in warmer weather. "High-rise syndrome" is a collection of various injuries that are the result of a fall from a high window.

Amazingly, there are many stories of cats surviving falls from several flights up. But there are far more who fell and didn't make it. The saddest part of it is nearly all of those falls could have been prevented.

Every window that you plan to open needs to have a screen. And not just any screen. A cat-proof screen has to fit the window frame securely enough to stay firmly in place when confronted by ten or more pounds of cat. When ordering or replacing screens, use a heavy-duty grade of hardware cloth since ordinary screens can be easily torn by claws or teeth. Even a fall from a second- or third-story window can cause serious injury or death, so inspect all screens regularly, especially toward the end of winter in cold-weather areas of the country. Screens can warp, tear, or fatigue in the off-season.

Some city cat owners think letting Tabby out on the balcony of their apartment is a safe way to give him some fresh air and sunshine. Actually, a good number of "high-rise syndrome" cats were stalking moths, birds, or other irresistible things on an upper-floor balcony, when an ill-timed pounce or missed step sent them over the railing. Even a leash or tether on an open balcony doesn't ensure your cat's safety. A panicked cat dangling by his collar or harness can be strangled, seriously injured, or squirm loose and fall anyway.

Though you buy toys to amuse your cat, the wrong toy can be dangerous. In the next section, we will teach you what toys are safe for your cat.

"My cat is a chowhound -- she never misses a meal," one cat owner recalls. "So when she didn't come running at dinnertime, I knew something was very wrong. I found her under the bed, and when I coaxed her out, she was staggering and drooling. I was terrified. She had this funny smell, which I recognized as the cleaning fluid I kept in my linen closet. I ran to the closet, and I found the door open and the can of cleaning fluid spilled on the floor.

"The problem is, we live a good 30 minutes from the nearest veterinarian. I didn't know how long she had been poisoned, and I wasn't sure that she had another half hour to spare. Then I remembered about the hotline -- and it saved my cat's life." 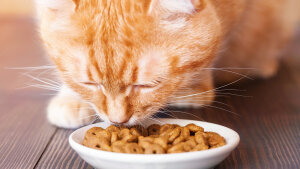 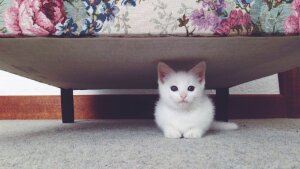 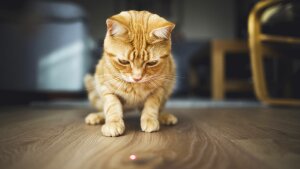