How to Give First Aid to Your Dog

How to Treat a Bloated Dog 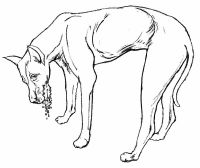 It is hard to accept the fact that a seemingly healthy dog can, within an hour, be fighting for its life. Bloat is an extremely serious, potentially fatal condition. Professional treatment is urgent and should not be delayed.

Bloat seems to affect large, deep-chested dogs more than other breeds. The symptoms are dramatic and unmistakable and include excessive drooling, pacing, and agitation; an enlarged abdomen; and frequent attempts to vomit, which produces large amounts of white foam or nothing at all.

There is no satisfactory scientific explanation as to why bloat occurs. Basically, the stomach fills with gas, like a blown-up balloon. But with the balloon there is room for expansion. With the stomach there is none, so the gas places pressure on the spleen, liver, and other internal organs.

If you suspect your pet is suffering from bloat, transport the dog immediately to the veterinarian. Bloat is frequently followed by gastric torsion (turning of the stomach), which leads to shock and death in a matter of a few hours.

To prevent bloat and subsequent torsion, feed the dog small meals several times a day rather than one large meal, and see that heavy exercise is avoided after meals.

Check the next section for advice on what to do if your pet has a broken leg, including how to attach a splint.