The History of the Humane Society 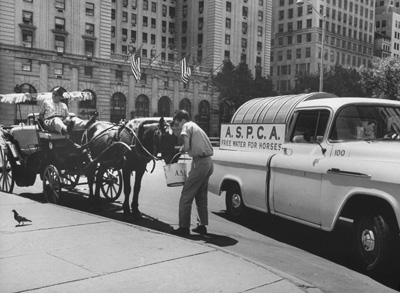 July 1963: A horse that gives tourists rides through Central Park is being fed by an ASPCA and Humane Society worker during a summer heat wave.
Arthur Schatz/Time & Life Pictures/Getty Images

­The Humane Society wasn't the first organization to work toward helping anima­ls. The Society for the Prevention of Cruelty to Animals was founded in 1866. It was the first organization of its kind in the United States, but it wasn't the last -- over the next decade, several similar organizations came into existence [source: Learning to Give]. In 1877, delegates from 27 of these humane organizations across 10 states banded together to form the American Humane Association (AHA). Its main priority was to help farm animals and improve the conditions of their lives [source: American Humane Society].

The AHA worked for more than 65 years to help animals throughout the United States. But in 1954, a rift arose among its members. There was great debate about animals that were abandoned at animal shelters and had little to no hope of being adopted. Some members of the AHA wanted those animals turned over to laboratories for research. Others felt that was cruel and went against what they were fighting for -- those members broke off from the AHA and started the Humane Society of the United States. Robert J. Chenoweth was selected to lead the new organization, and Oliver M. Evans was chosen as its first director.

The primary goal of the HSUS was to eliminate all animal cruelty throughout the world, not just in particular areas. Its first fight was against legislation that would require shelters to turn over animals for scientific research. The next 50 years saw a myriad of accomplishments from the HSUS in several fields:

Today, the HSUS is based in Washington, D.C., with nine regional offices, eight affiliates and an international arm. There are 569 paid staff members -- including veterinarians, biologists, lawyers and behaviorists -- as well as the volunteers that work throughout the country. The Humane Society is a 501(c)(3) charitable organization, which keeps the business running the same way other nonprofits do: through donations and fundraising. It boasts nearly 10 million members and constituents and saw total revenue of more than $100 million in 2006, with more than $91 million coming directly from public support [source: HSUS].

While the Humane Society of the United States has done a lot to help animals in need in the past, it's up to some pretty cool activities right now. In the next section, we'll take a look at some of the HSUS' current programs.

In February 2008, the U.S. Department of Agriculture issued a recall of 143 million pounds of beef. This beef came from a California plant and was sent all over the country, with nearly half of it going to schools. The recall came because of an undercover investigation conducted by the Humane Society of the United States. In October 2007, an employee of the HSUS started working at the processing plant, and using an undercover camera, he recorded several acts of animal cruelty over the next few months [sources: Salon, CNN].