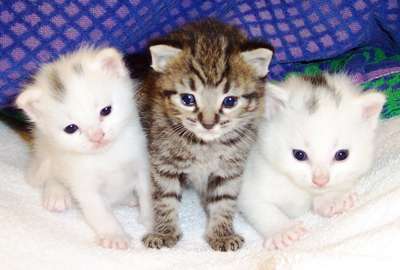 You just can't help it -- you love cats. Those cuddly balls of fur grow up to be independent-minded freethinkers, yet still know when you need a purr session. You enjoy watching Fancy Feast ads on TV and looking at cute cat photos on the Internet. And everyone at your cat's last birthday party knows that you have a sweatshirt featuring an embroidered cat chasing a ball of yarn.

The problem is, every time you're anywhere near your cat, you break out in hives. Your nose drips, your eyes water and your throat feels as if it will close. As much as you love cats, you are also one of the millions of people who are allergic to them. If you choose your cat over your physician's advice against owning one, don't feel bad. One-third of people who are allergic to cats keep one anyway [source: Humane Society of the United States]. There are a couple of ways to help treat allergy symptoms. Over-the-counter allergy medicines and prescription hay fever medicines might do the trick. If they don't, an allergic pet lover may turn to immunotherapy -- a series of injections of an allergen that eventually decreases the effects the allergen has on the body.

Or, you can avoid the whole mess entirely. For around $6,000, you can purchase a pet that is tailor-made for you: a hypoallergenic cat.

In 2006, the American company Allerca Lifestyle Pets began delivering cats that produce little or no allergic reaction in humans -- what the company calls "the world's first scientifically proven hypoallergenic cats." For $5,950, Allerca will deliver a 12-week-old kitten to your doorstep. The company says its kittens are "friendly, playful and affectionate," as each one has already been socialized.

The cats are a short-haired breed based on the British shorthair, and they grow to a medium size of about 10 to 15 pounds. Customers can specify the type of coat color and pattern, as well as the sex of the kitten they would like, but Allerca makes no guarantee that's what the family will receive. These are, after all, cats, not robots. They are expected to grow up to be just like any other cats, with the one important distinction of being hypoallergenic.

Would you pay $6,000 for a hypoallergenic cat? If so, you're not alone. It looks like the prospect of being able to reconcile a lifelong affection for cats with a lifelong allergy to them appeals to a great many people. As of October 2007, Allerca says that the wait for one of its hypoallergenic bundles of love is two years. Cat lovers who just can't bear that kind of delay can cut the waiting time in half for an extra $1,950 through the company's Premium Placement program.

So how exactly does a mild-mannered little kitty cause a severe allergic reaction -- and in some cases, asthma -- in certain people? How did Allerca get around this long-standing problem? Read on for the answers to these questions. 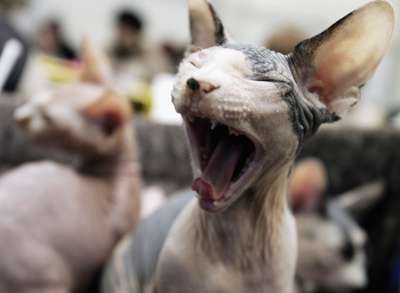 Even a shorthair (or hairless, like this Canadian Sphynx kitten) can cause allergies in humans.
Photo courtesy Oleg Nikishin/Getty Images

It's not your cat's fault that you are allergic to it. Most cat allergies result from a reaction to the Fel d 1 glycoprotein, which cats secrete through their skin and saliva. This glycoprotein is smaller than dust and can hang around your home for months [source: Asthma and Allergy Foundation of America].

A person's best bet for reducing pet allergies is avoiding pets altogether, says the Asthma and Allergy Foundation of America. But living a pet-free life simply won't do for some people. As such, pet owners who have allergies have developed some tips for cutting down on the allergic effects. Washing your cat twice a week, avoiding wool sweaters, opting for females or neutered male cats and keeping only short-haired cats are all examples of plausible ways to help cut down on allergic reactions to cats [source: Cat World].

The problem is that there's no such thing as a hypoallergenic cat -- that is, until now. So allergic cat owners have traditionally had to look to the field of medicine for relief. And it's not just cat owners who suffer -- dog, horse, and even bird owners can suffer similar allergies.

The Fel d 1 glycoprotein, however, is naturally produced exclusively by cats (the "Fel" is short for "feline"). Cats emit the allergen through their saliva or skin, so when you pet a cat or it licks you, the Fel d 1 protein is transmitted. It can also rub off on anything the cat touches -- especially fibers -- and the protein is tough to get rid of. What's worse, this allergen can be transferred from a home where a cat lives to other cat-free places. The allergen can also build up quickly, which was proven by a study of a mattress store in Sweden. ­ [source: National Center for Biotechnology Information]. Researchers found that new mattresses in stores had high levels of allergens just from customers who own pets trying out the mattresses.

The Fel d 1 protein can cause a bad reaction is some humans. People with sensitized immune systems have undergone a process of becoming allergic. After being exposed to the glycoprotein, the sensitized person's body creates immunoglobin E (IgE) -- an antibody to fight what the body sees as an invader. (In people who don't become sensitive to pets, the Fel d 1 glycoprotein is basically inert -- it has no effect.) The next time the person encounters the protein, the body releases the IgE antibodies. These, in turn, trigger a release of histamines -- a compound that relaxes the capillaries and smooth muscle tissue, allowing them to become more permeable. This makes the soft tissue areas around the eyes, nose and throat become much more sensitive to everyday irritants. So allergy sufferers end up with watery eyes, runny noses and scratchy throats [source: Mayo Clinic].

At its worst, the Fel d 1 glycoprotein can even cause asthma in allergy sufferers. This is not uncommon. A study published by the National Institute of Health showed that about 50 percent of asthma cases were allergy-related and that 30 percent of those cases came from cat allergies [source: NIH].

So how did Allerca come up with the hypoallergenic cat? Read the next page to find out. 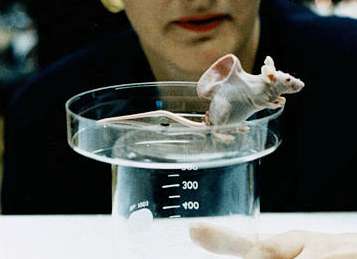 A mouse with an ear growing on its back: an example of bioengineering.
Photo courtesy AP

The term "hypoallergenic" means that the likelihood of an allergic reaction is decreased. Currently, the United States Food and Drug Administration requires no proof of any claims of a product's hypoallergenic properties [source: FDA]. This holds true whether the product is a pillowcase, cosmetic or cat.

Allerca says that it has tested its cats on people with known pet allergies. When presented with an engineered cat, the test subjects showed no symptoms of their allergies. This same group of people was also presented with non-Allerca cats as a control. These cats did produce allergic reactions among the test subjects, the company says. In what the company deems the "rare event" of a customer suffering an allergic reaction to one of its cats, Allerca offers a one-year guarantee, promising a full refund [source: Allerca].

So how did Allerca do it? At first glance, one might think the company bioengineered their hypoallergenic cats. Bioengineering is the process of creating something with active cell growth through an artificial process, such as growing a human ear on a lab mouse. Bioengineering can also mean tinkering with the genetic makeup of a living thing to produce a desired result.

Allerca avoided any bioengineering process, however. Customers who want their hypoallergenic cat to come in rainbow polka dots or a nice Malcolm plaid will have to wait a few more years. Instead, the process Allerca uses is a form of selective breeding -- mating only those animals that possess desired traits. Through selective breeding, desired traits are promoted and undesirable traits are bred out of the family line. It looks like the most high-tech part of Allerca's kitties is the Microchip Identifier implanted in each one.

Though the company remains vague about the specifics of the selective breeding program that produces its hypoallergenic cats, Allerca does say that it achieved success through genetic divergence. This is a natural process found in evolution. Take, for example, the separation of humans from chimps. Humans and chimps still share 99 percent common DNA, and scientists believe that it was just a single reproductive trait among males that caused the divergence between our species and chimps [source: Cornell University].

When this split between man and chimp took place, a genetic divergence occurred: One species evolved into two. What the Allerca scientists undertook was slightly less dramatic than the evolution of man from apes. The company isolated the gene that produced the Fel d 1 glycoprotein. Using what it calls bioinformatics, it looked for the cat breed that would most likely genetically diverge from the rest of the breeds in the production of Fel d 1. It appears that Allerca simply sped up the process of genetic divergence within the British Shorthair breed through selective breeding. In other words, the company did what nature would most likely have done over time, but more quickly.

The hypoallergenic cats don't appear to have suffered any genetic damage or mutations from the selective breeding process. Allerca says that its cats still produce the Fel d 1 protein, but that the cats produce a version of it with a different molecular weight that simply doesn't produce allergic reactions in humans [source: Allerca]

So what happens when an Allerca-brand cat interbreeds with common cats in its new neighborhood? Not to worry. All breeding is done in a tightly controlled environment, overseen by Allerca, and each kitten arrives at its new home spayed or neutered.

For more information on cats and genes, read the next page.