Browse the article The Joys of Living With Guinea Pigs 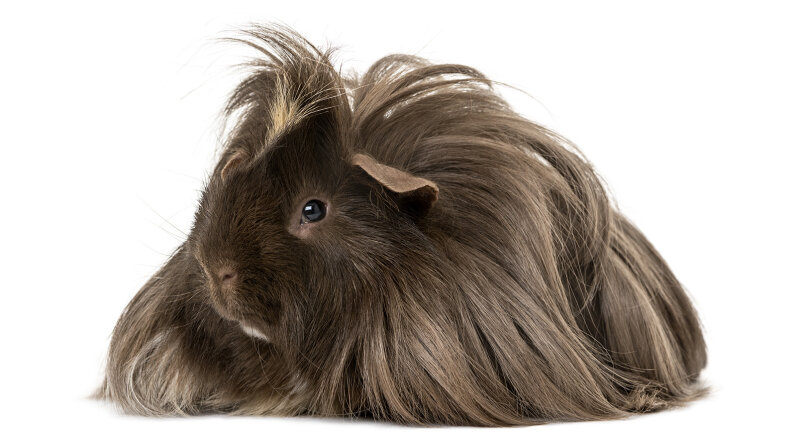 The long-haired Texel guinea pig is very popular, and looks almost like a walking wig. Life On White/Getty Images

They're small. They're social. They're as furry as furry gets. They make happy noises that sound like wheek! And when they're really excited, they bounce and leap around in ways some people call "popcorning." They kind of look like Tribbles from the old "Star Trek"series. What are these adorable-sounding creatures? They're the walking wigs known as guinea pigs.

Scientific types call them Cavia porcellus, which is why they're sometimes known as cavies. The American Cavy Breeders Association recognizes 11 breeds, but the most common variety is the American Cavy. That's the one you'll likely see at most large pet stores. But for the best hairstyles, check out breeds like the long-haired Texel or the Abyssinian, which seems to be made entirely of cowlicks.

Could a cavy be your new best friend? In truth, probably yes. They are a delight. Let's look at how to care for these happy little furballs.

Compared to a lot of pets, guinea pigs are pretty easy to care for. The shorter-hair breeds do a pretty good job of grooming themselves. They only require an occasional session with a brush and baths only if they get into something they shouldn't. They don't need to be walked twice a day, and no one has to scoop poop out of a litter box.

But they do need more care than you might expect. Like many cavy fans, Jake Sherlock at the Oregon Humane Society doesn't recommend guinea pigs as a first pet for small kids. "I make sure parents understand that they'll have to help with care," he says.

The thing is, unlike lots of other animals, guinea pigs don't keep a strict separation between where they eat, sleep, and ... evacuate. OK, pee and poop. They're not careful poopers. So their bedding needs to be changed out pretty frequently to keep them healthy.

Guinea pigs tend to live to be 7 or 8 years old. How long they live can depend on how they're cared for, as well as genetic factors, so be sure to give your new furry friend the best chance at a long life.

Guinea pigs aren't related to the kinds of pigs with snouts that go "oink," but they eat like pigs. Cavies are vegetarian, so they don't eat meat or dairy. But they will eat, and eat, and eat ... it's not uncommon for a guinea pig to be fat as well as fluffy.

The main source of nutrition for cavies is Timothy hay, which is also their bedding. Remember what we said about care: Hay is their food, their bed and their bathroom. Now you can see why cleaning the cage often and replacing the hay is so crucial.

In addition to hay, give your new friend guinea pig pellets. They've have been formulated to give pigs the range of nutrients they need. Because they're so nutrient dense, though, pellets can make guinea pigs obese. If your pig takes a nap without finishing the pellets in their bowl, you can remove the pellets and replace it with a few fruits or veggies.

Guinea pigs love fresh food. They will even develop favorites and wheek their little faces off when they see you bringing, say, blueberries or kiwi slices. Guinea pigs cannot make vitamin C, so foods high in this vitamin are great choices. Sherlock also notes that you can give them one vitamin C tablet (not a multivitamin) a day.

Guinea pig teeth grow always and forever. They need to grind their front teeth down, so there are loads of cute toothy toys for this purpose. Just avoid any chew toys made of cedar, as this wood is toxic to guinea pigs.

Guinea pigs like friends, and do best in same-sex pairs.
©Wayne Shipley/Getty Images

But many guinea pig people build their own cages. There are entire websites devoted to plans and tips and examples of the cages people have built, both simple and elaborate. Sherlock says that in his experience, guinea pig people are artist types who love being creative with their cages.

Guinea pigs can't really jump, so as long as you don't have any other animals that might bother them, your cage doesn't need a lid. This makes it easier to clean out the old Timothy hay. It also makes it easier to lift your little friend out of the cage for playing and snuggles.

Sherlock recommends about 30 minutes a day of pig playtime. They can learn their names, and they definitely learn to recognize you. Wheek! Cavies have few behavioral issues, but if they do seem nervous or shy, playtime every day can help with these issues.

Remember that, like hamsters, cavies are prey animals, so they can work themselves into a panic pretty quickly. They'll need time to get used to you, but Sherlock says they're very confident once they're comfortable in their environment.

One Pig or Two?

If you plan on being a devoted, stay-at-home pig parent, you might be able to get by with just one. But they really do better in same-sex pairs. (Putting a male and female together means having many more guinea pigs than you probably intended to have.)

Sherlock says that littermates are not guaranteed to get along. You may have noticed this in your own life as a human sibling. If your two pigs were living happily together at the pet store or rescue, they'll be fine together at your house. If you're introducing new pigs, you can put two separate cages next to each other until they get used to each other. After a while, they'll be friendly, and you can put the two into one large cage to be one happy guinea pig family.

Now That's Awesome
Guinea pigs are such social creatures that in Switzerland, it's illegal to own one lonely little cavy. (You also cannot own one parrot.) Having one guinea pig is considered to be bad for their health.