by Alia Hoyt Jan 30, 2018
Japan Airlines offers dogs and their owners a special charter flight to Kagoshima Prefecture in Japan. People and pets stay together in a hotel and go sightseeing in rented cars. Richard Atrero de Guzman/Anadolu Agency/Getty Images

The skies got a little less friendly in June 2017 when a 70-pound (32-kilogram) dog on board a Delta Airlines flight bit a passenger multiple times in the face, causing the passenger to be hospitalized. This event, as well as the skyrocketing numbers of pets flying as service and "emotional support animals" (ESAs) — up 150 percent between 2015 and 2017, according to Delta — prompted the airline and others to enact more stringent requirements for on-board animals.

Delta's new rules, which become effective on March 1, 2018, say that owners of ESAs will be required to show proof of their pets' health or vaccinations at least 48 hours before a flight. They also need to present a statement from their doctor declaring a mental health disability. Finally, owners also must sign a statement saying their animal can behave.

ESAs occupy a different category from service animals who are highly trained to perform specific, potentially life-saving tasks for people living with a disability. "Emotional support animals are companion pets ("ordinary" house pets) that are recommended by an individual's mental health professional for the alleviation of symptoms of an emotional disability," emails Beth Zimmerman, founder of Pets For Patriots, an organization that matches shelter dogs and cats with veterans. "[ESAs] do not have to be task-trained or have any unique training at all; their mere presence is assistive."

ESAs don't even have to be dogs. Snakes, rats, even pigs can be used as ESAs. But, airlines don't have to accommodate unusual service animals, notes healthcare attorney Erin Jackson. However, the airline "must provide the passenger with a written explanation of its reasoning," she says via email

"The research on the positive impact that emotional support animals have on people who are struggling with mental illness is pretty plentiful," says psychologist Tanisha Ranger, who works mainly with veterans. "They have a calming effect, lowering stress levels in the owner. They offer companionship and help to lessen isolation. ... They offer a sense of security and protection for those who struggle with PTSD.”

Ashley Jacobs, CEO of Sitting for a Cause and resident of Newport Beach, California suffers from hereditary hemochromatosis, which requires her to have regular phlebotomies. "Needles are my biggest fear in the world, so my ESA comes with me to all my phlebotomies. Having her with me keeps me from panicking during the procedure," she says of her 9-year-old golden retriever, Diamond.

Yet Jacobs wouldn't take Diamond with her on a plane. For one, she doesn't need her dog for traveling. Also, "while she is a very well-behaved dog ... it's hard to guarantee she wouldn't get a little antsy/anxious about the new sounds/smells/environment on a plane. She's also about 70 pounds and takes up a bit of space, so for the comfort of other passengers and to avoid giving ESAs a potentially bad rep, I figured it's best to leave her at home," she says in an email interview.

Unlike service dogs, who are allowed access pretty much everywhere by Federal law, the only legal rights ESAs have are reasonable accommodation in no-pet housing, and the right to accompany their owners in the cabin of a commercial aircraft without having to be kept in a container or to pay a pet transportation fee — typically at least $100 one way. Many passengers looking to avoid this fee have started to classify their pets as emotional support animals.

"There is a lot of fraud out there," says Ranger by email. "A cursory Google search will find you any number of websites where you can buy letters from clinicians, tags, and vests which may not be legitimate. And when untrained animals attack innocent bystanders, it further creates stigma for those who actually need service animals."

"Individuals with disabilities often have additional stress as they do not know when they may encounter a non-trained ESA dog that may inflict harm on them and their trained assistance dog," adds Chris Diefenthaler, operations administrator for Assistance Dogs International. "The general public is also affected as they cannot determine which assistance dog team is trained or which ones are non-trained ESA dogs."

The jury's still out on exactly what needs to happen to rectify the issue, but most industry experts agree that something needs to be done. The Air Carrier Access Act lists the specific rules regarding service animals and ESAs aboard aircraft and states that airlines may request documentation for ESAs, such as the type Delta will require. The rules say airlines can determine whether the animal is truly a service or support animal by "observing the behavior of the animal," looking for physical indicators, such as a harness and accepting the "credible verbal assurances of an individual with a disability using the animal."

Some 19 states have laws prohibiting people from passing off their pets as service animals but they're hard to enforce due to Americans with Disabilities Act rules concerning what questions a business owner may ask about a service animal -- for instance a business owner cannot ask for documentation or demonstration of a service dog's training. There's also no registry of service-trained animals.

"Unfortunately, the prevalence of ESA vest and registry scams ... desensitizes the public from understanding the impact and importance of ESAs to individuals who truly need them for therapeutic purposes," says attorney Erin Jackson, who has written about the hostility she encountered from airline employees and passengers when she traveled with her ESA. "Instead of viewing the animal as a therapy tool, fellow travelers may resent other passengers who are allowed to bring their 'pet' on the plane. However, note that because ESAs don't wear identification, other travelers may not be able to distinguish between a pet and an ESA."

Now That's Cool
Therapy dogs are like a cross between ESAs and service dogs. Therapy dogs provide comfort to people in hospitals or schools, for instance. Although they must be well-trained and vetted, it's not nearly to the same level as service dogs. And unlike service dogs, they don't have a right to go anywhere — they have to be invited in.

A Workout Before Takeoff: Will Airport Gyms Become a Thing?

Geoengineering the Earth’s Atmosphere to Fight Climate Change Could Backfire 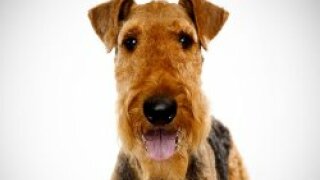 How to Train a Service Dog 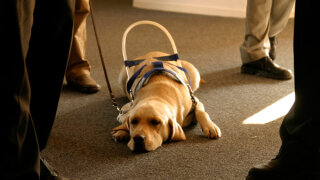 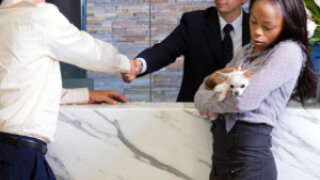 All About Pet Shipping