Many of us have seen a turtle tucking itself into its protective shell, pulling in not only its four legs, but its head and tail, too. But while its shell shields a turtle's tender innards, it wasn't originally designed for that purpose, an international group of scientists found. Instead, they say, the turtle shell most likely began as a digging tool.

Tyler Lyson, lead author of the recently released study "Fossorial Origin of the Turtle Shell" and a paleontologist with the Denver Museum of Nature & Science, writes that when turtles first began developing shells — a major evolutionary transition — the process included a broadening of the ribs. Broadened ribs made the turtle's thoracic region, or chest, more rigid. But the puzzling thing is that a rigid chest means it's harder for the animal to breathe easily or move swiftly — hardly changes that appear to enhance protective capabilities.

But that's because initially, turtle shells, made of more than 50 fused bones, and their broad ribs were developed not for protection, but to lend stability to the turtle so it could forcefully dig with its forelimbs, the researchers found. Being able to dig into the ground for food and shelter, they theorize, allowed the turtles to move from the land and into the water. This may have saved them in their early evolutionary history, specifically during the Permian/Triassic extinction — the greatest mass extinction ever, and one which was spurred by hot, dry weather.

These insights came after two of the study's co-authors discovered several specimens of a 260-million-year-old turtle named Eunotosaurus africanus, the oldest-known partially shelled proto-turtle. These specimens, along with another partially shelled turtle found by a young boy in South Africa, indicate turtles developed shells for use as digging aids.

A recent study on the oldest proto turtle, Eunotosaurus (left), suggests the broadening of the ribs in turtles was initially an adaptation for burrowing to escape the extremely arid environment of South Africa 260 million years ago. Later the ribs were...
Luke Norton/Denver Museum of Nature & Science

The scientists found similarities between these turtles and gopher tortoises, which use their heads and necks to brace themselves while they dig with their forelimbs. The authors believe that the turtle's shell as a protective enclosure is an exadaption, meaning an evolutionary trait that originally served one function but ends up serving another.

Now That's Interesting
Scientists have been arguing for at least 200 years over whether the turtle's shell evolved from bony scales (like those on an armadillo or certain lizards) or as part of its rib broadening. Thanks to the recent discovery of partially shelled stem turtles, it now seems the latter theory is more likely.

Stuntman Skydives With No Parachute, Just Aims for Giant Net

Diving for Golf Balls Is a Real Job 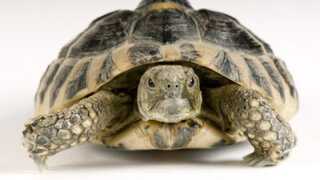 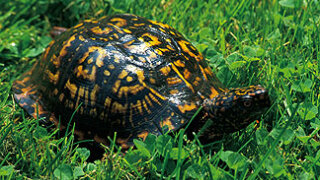 How to Take Care Of a Turtle 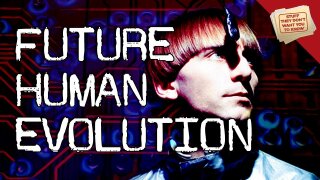 Stuff They Don't Want You To Know: Future Human Evolution