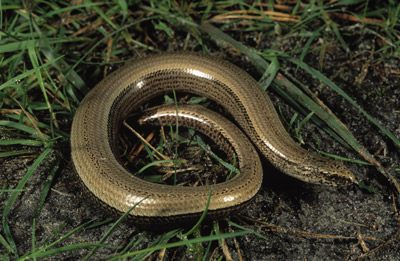 It's very understandable if you see a legless lizard and assume you're looking at a snake. The two are similar animals, not only in appearance, but also in behavior. Both lay eggs that mature outside the body, both slither along the ground in a roughly S-like fashion, and both eat some of the same things, like mice and bird eggs. Glass lizards also enjoy beetles, grasshoppers, snails and spiders.

They tend to go for the smaller prey. This is because a major physical trait that distinguishes them from snakes: Glass lizards have inflexible jaws. Unlike snakes, they can't "unlock" their jaws to swallow a whole rabbit. A legless lizard has to stick to prey that's smaller than its own head.

There are other differences that are easier to spot. Glass lizards have moveable eyelids; snakes have no eyelids at all. Glass lizards also have ear openings, while snakes don't. And then there's the trait that earned the creature the "glass" moniker.

Legless lizards, like most other lizards, can detach their tail when they need to. When threatened by a predator, one of the legless lizard's main defensive mechanisms is to separate its body from its tail. It leaves the tail behind -- still wriggling -- to distract whatever predator is after it, and then runs away. When the tail breaks off, it often breaks into more than one piece, appearing to shatter like glass. The lizard can only regenerate the tail one time, though, and regeneration can take several months to a year or two [sources: WDNR, LHS].

The tail-drop is a very effective defense mechanism, even if it only has limited use. Most of a legless lizard's length (up to two-thirds) is tail [source: Snakes and Frogs]. A snake has the opposite proportions. If you pick up a legless lizard, you'll notice that it doesn't feel quite like a snake, and that's in part because of this difference in body-to-tail proportion. Since the tail is stiffer than the body, a snake feels more supple than a glass lizard.

A legless lizard's comparatively limited range of motion isn't just about its proportions. Whereas a snake can use its sides and its belly scales to push itself along the ground, a legless lizard can only use its sides. Its motion is only side-to-side, which is a serious drawback in terms of survival. It does just fine when it has objects to push up against, but if it ends up on a totally flat surface, like a paved road, it can't move at all. So whereas a snake can move across a roadway before a car hits it, a legless lizard is just a sitting duck. With more and more development infringing on their habitat, legless lizards increasingly find themselves falling short of their typical 8-to-9 year lifespan [source: WDNR].

Even with all of these differences, glass lizards and snakes appear to come from similar beginnings. In 2007, scientists discovered a 95-million-year-old fossil that's the oldest known proof of the lizard's evolution to a legless state. This new fossil, called Adriosaurus microbrachis, has tiny, nonfunctioning front legs, but still-functioning and normal-sized hind legs. The fossil is the same approximate age as snake fossils that have similar vestigial front legs, leading to the conclusion that snakes and lizards lost their legs around the same time. The new creature is believed to be the closest relative to whatever spawned both snakes and lizards.

For more information on legless lizards and related topics, slide through the links below. 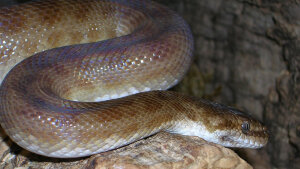 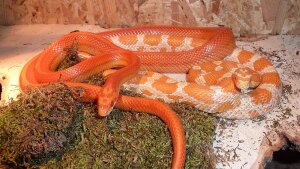