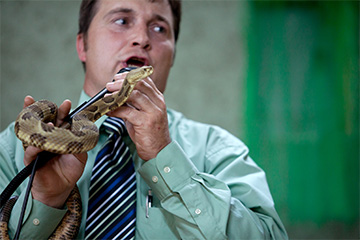 Pastor Mack Wolford, a member of the Pentecostal 'Signs Following' tradition, handles a rattlesnake during a service at the Church of the Lord Jesus in Jolo, West Virginia, on Sept. 2, 2011. Wolford would die the following year from a rattlesnake bite.
Lauren Pond For The Washington Post via Getty Images

So Coots' death in 2014 from a rattlesnake bite received media coverage, feeding the general public's enduring fascination with religious snake handling. And the practice is fascinating. It's downright brazen. But they're not the only ones who handle deadly snakes.

Scientists milk snakes for the venom that will produce lifesaving anti-venom treatments, or they research topics like the actual pressure exerted when a constrictor kills its prey [source: Moon and Mehta]. Snake veterinarians slide feeding tubes down the throats of fully conscious snakes [source: Pet Place]. Snake removers show up when someone finds a 14-foot (4-meter) python in the backyard shed.

Not all snakes are deadly. Most are pretty harmless, especially to something as large as a person [source: Wexo]. But those that can do harm can do it awfully. Venomous snakes use their fangs to inject venom, a kind of poison that causes some combination of extreme pain, burning, vomiting, convulsions, tissue death, paralysis, swelling of the throat, nerve damage, internal bleeding and multisystem organ failure, among other ill effects [sources: Barish and Arnold, MedlinePlus]. A constrictor propels itself forward to strike and then roll over its prey, immobilizing it as the snake latches on to a body part with rear-angled teeth. The constrictor then coils around the prey and tightens until the prey dies from suffocation, cardiac arrest or spinal fracture, whichever comes first [source: Team].

Voluntarily handling snakes that can kill or maim a full-grown human likely takes a certain type of person, whether they're doing it for a living or for God. Confident. Accepting of risk. Not terrified of snakes. But the professionals and the preachers take vastly different approaches to the practice. Professionals tend to put a high premium on the survival of all involved. 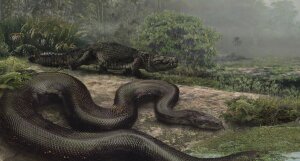 What's the largest snake that has ever existed? 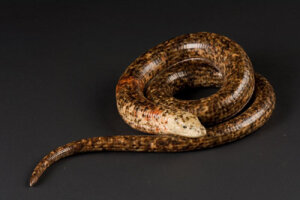