The Frog Skeletons vs. Human Skeletons 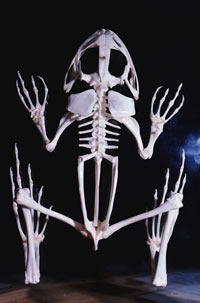 As anyone who has dissected one in biology class knows, a frog's internal organs look a lot like what you'd find inside a much larger animal. Just like mammals -- including people -- a frog's body has a heart and lungs as well as a stomach, pancreas, liver, gallbladder and intestines.

Even though frogs don't look much like people on the outside, their skeletons are similar to people's skeletons, especially when it comes to their limbs. Just like in a person's arms, in a frog's front legs are bones called the humerus, the radius and the ulna. However, a frog's radius and ulna are fused into one bone. The same is true for a frog's legs -- the femur supports its upper leg, and the bones of the lower leg, the tibia and fibula, are fused. A frog has two scapulae, or shoulder blades, and clavicles, or collarbones, that are shaped a lot like the same bones in a person's body.

A collection of small bones makes up a frog's digits, or its fingers and toes. Most of the time, a frog has five toes on its back legs and four toes on its front legs. The length and shape of the toes has a big impact on how the frog moves. Tree frogs have long, flexible toes that allow them to grasp stems and branches as they climb around. Aquatic frogs also have long toes -- the spaces between them are webbed so they can use their feet like flippers. Some frogs burrow into the soil in the summer or winter. Often, their feet are shorter and wider, like shovels or spades.

But a frog's skeleton isn't so similar to a human's once you get past the extremities. Frogs have skulls but don't have necks, so they can't turn, lift or lower their heads like people can. A frog also doesn't have ribs. The rib-like structures you can see in the picture above are part of its spine. A frog's pelvis can slide up and down its spine, which may help it jump. The vertebrae at the bottom end of the spine are fused into one bone called the urostyle.

Read on to find out how frogs hear without ears and why their eyes are perched on top of their heads.

Some frogs use a wet or sticky substance on their feet to help them climb trees and cling to surfaces. In some species, this is a very thin layer of watery fluid that increases the friction between the frog's feet and the surface. In others, it's an adhesive. These frogs have textured feet -- the surface acts like series of microscopic canals that keep the adhesive flexible and prevent it from cracking as the frog moves.