Eating and Being Eaten: The Ecological Role of Frogs 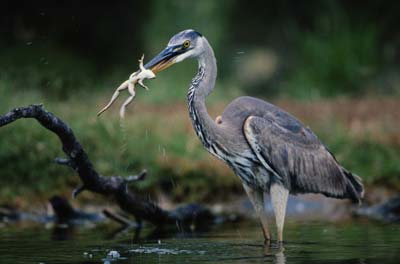 Frogs play a central role in many ecosystems. They control the insect population, and they're a food source for many larger animals. To keep things in balance, frogs use lots of survival tools. Some run away, play dead or swell up when threatened. Others have more sophisticated defenses. Many use color as a warning or as camouflage. For example, the four-eyed frog, Physalaemus nattereri, has two spots that look like eyes near its back legs. It shows these spots to predators, making it look like a more threatening animal.

Tina Bayden sells skinned frogs at the Laoag public market in Ilocos Norte in the northern Philippines, October 2, 2005. The frogs are considered a delicacy in the region.
Photo credit should read JOEL NITO/AFP/Getty Images

Frogs can also secrete substances through their skin. Some secretions are beneficial -- researchers have used some of them to create new antibiotics and painkillers. But some frogs secrete toxins so powerful that just touching the frog can be fatal. Poison dart frogs, also known as dart poison and poison arrow frogs, are the most famous example. Their toxicity is partially due to their diet -- in captivity, without the right ants to feed on, they're not as dangerous. But even common toads can be toxic, which is why dogs can get very sick or die from eating toads.

But not all of the threats come from wild animals. In many parts of the world, frogs are a delicacy. Since it can be difficult to farm raise frogs, this requires people to hunt and capture them. In some parts of the world, this has led to a steep decline in frog population.

Because frogs drink through their skin, they're susceptible to several manmade threats. In some parts of the world, frog population has declined due to habitat destruction during development and the damming of rivers and streams. Frogs are also sensitive to water pollution and acid rain. Chemicals, drug residues and other pollutants in the water appear to be causing everything from deformed limbs to feminized male sexual organs in frogs.

Global warming may threaten frogs as well. Frogs are largely ectothermic -- they rely on their environment to control their body temperature. Some frogs can survive temperature extremes. For example, the wood frog can live north of the Arctic Circle. Up to 45 percent of its body freezes in the winter, and proteins and glucose protect its tissues from damage. Wood frogs thaw out again in the spring. Other frogs hibernate or go into a hibernation-like state called aestivation to survive hot weather in the summer.

But not all frogs have these adaptations, so climate change could affect frogs' abilities to keep their bodies at the right temperature. Changes in the global climate may have made it easier for a deadly fungus to spread through the frog population around the world. Next, we'll look at this fungus and what researchers are trying to do to stop it.