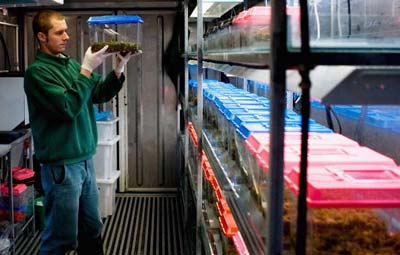 Reptile keeper Stuart Kozlowski inspects containers housing corroboree frogs at Taronga Zoo in Sydney, Australia. Around 130 of the critically endangered frogs are housed in a quarantine facility at the zoo. Because of the chytrid fungus, scientists fear these frogs will be extinct in the wild in five years.
Ian Waldie/Getty Images

Today, a major threat to frogs is the chytrid fungus. This fungus feeds on keratin, a component of skin that makes it sturdy and tough. Tadpoles have only a little keratin around their mouths. But as frogs grow, their skin thickens on the soles of their feet and anywhere else their bodies repeatedly come in contact with the ground, such as the lower abdomen. So while the fungus doesn't usually affect tadpoles, it can kill adult frogs. Researchers aren't yet sure of exactly how the fungus kills the frogs. The two prevailing theories are that the fungus produces lethal toxins or that its presence interferes with the exchange of oxygen and carbon dioxide through the skin.

At present, scientists believe that this fungus came from African clawed frogs. These frogs carry the fungus on their skin but suffer no ill effects from it. However, African clawed frogs have spread far beyond their native habitat, carrying the fungus with them, due to global trade. Scientists around the world have used these frogs for research and, from the 1930s to the 50s, to conduct pregnancy tests. People have also kept the frogs as pets. The fungus isn't just riding on the backs of one species of frog today, though. Researchers suspect that it may now be spreading through airborne spores.

Researchers believe that about a third of the frogs in the world may face extinction due to the chytrid fungus. Some species have already disappeared. There is no effective treatment for the fungus, so researchers around the world are trying to quarantine as many frog species as possible. One such quarantine facility is the $500 million Amphibian Ark project.

Although the chytrid fungus is a global problem, there are a couple of things you can do to help stop its spread. First, report the appearance of sick frogs or frogs that seem to have died without an obvious cause to your local authorities. Second, never, ever release pet frogs into the wild. Released pet frogs can breed, overwhelming the local frog population, and they can spread disease. Again, contact your local authorities to inquire about what to do.

You can learn more about frogs, amphibians and related topics by browsing the links below.

How can a frog tell you you're pregnant?