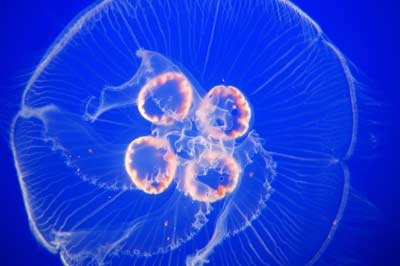 Pictures like this one are often used to illustrate bioluminescence, but sometimes they don't show luminescence at all. This dramatic display is the result of the camera's flash bouncing off of a moon jellyfish. See more marine life pictures.
Photo courtesy Kongxinzhu/Dreamstime

Animals that use their sense of sight to navigate generally have a hard time getting around without light. Some, like owls, have very large eyes that they use to collect lots of light. They also use their other senses to gather information about their surroundings. Humans, on the other hand, have put a lot of effort into creating portable, often artificial light sources, from torches to light bulbs and LEDs. Some bioluminescent life forms have an entirely different approach -- they make their own light and carry it around in their bodies.

­Many animals use the light they produce the same way people use flashlights or searchlights. But an­imals produce light very differently from the way light bulbs do. Traditional light bulbs create light through incandescence. A filament inside the bulb gets very hot and emits light. This process isn't particularly efficient, since generating enough heat to create light wastes an enormous amount of energy.

Glowing animals, on the other hand, typically create light through luminescence. In luminescent animals, chemical compounds mix together to produce a glow. It's a lot like the way the substances inside a light stick combine to make light. Luminescence is far more efficient than incandescence. It neither requires nor generates much heat, so it's sometimes known as cold light.

­Scientists had a basic idea of the difference between incandescence and luminescence as far back as 2,500 years ago. In the 1600s, researchers began to discover exactly how animals make their own light. But since different animals use different substances, scientists still don't know precisely how every bioluminescent species makes light. In some cases, researchers haven't figured out why an animal makes light or how it controls its on-off switch. Bioluminescence can also be difficult t­o study, since many animals exhaust their luminescent abilities when captured. In other cases, the process of capture destroys the light-producing organs.­

­In this article, we'll examine the basic process behind luminescence, as well as how animals use luminescent abilities to their advantage. We'll also take a look at some of the unanswered questions about how and why animals make light.