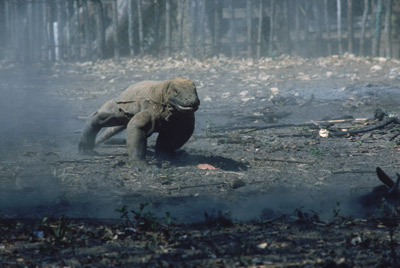 With nearly 60 teeth, serrated like a shark's and about 0.4 inches (1 centimeter) long, the Komodo dragon is a brutal predator. The real brilliance in the Komodo's system, though, lies in the guarantee of a meal.

An animal that doesn't die in the actual attack will almost always die within a few days. The Komodo waits patiently, following it for miles in a leisurely fashion, and then locates the dead animal by its smell. Like most lizards -- and snakes, for that matter -- Komodo dragons have a very good sense of smell. But it's not the kind of smell most of us are familiar with. Like a snake, a Komodo "smells" by collecting air with its forked tongue and then depositing it on receptors on the roof of its mouth. Using this method, it can detect a dead animal up to 5 miles (8 kilometers) off [source: Honolulu Zoo].

Why, exactly, an animal dies after the fact is a subject of some debate.

Until recently, scientists were sure that it was a Komodo dragon's oral bacteria that killed the prey within days after an attack. It's a very good explanation. A Komodo dragon's saliva can contain anywhere from 50 to 80 different bacteria [sources: National Geographic, BBC News]. With that much deadly bacteria entering the bloodstream through a bite, bacterial infection and death are guaranteed. But recent research suggests there may be another possibility as well.

In 2005, scientists concluded that komodo dragons (actually all monitor lizards, as well as iguanas) produce venom, not just a deadly supply of bacteria [source: New Scientist]. Venom is a toxin that's secreted by special glands and injected into an animal by a bite or sting. The researchers started looking specifically for venom in Komodos because they believed it was unlikely a bacterial infection could kill an animal in as little as a day or two. Now that at least one study has concluded that there's venom suspended in Komodo saliva, some believe this venom, and not a powerful bacterial cocktail, is what makes Komodos so reliably lethal.

Which brings us back to the question: cobra or Komodo? The comparison is kind of like pitting Alien against Predator -- it only works in the movies. And even in the 2005 B-movie "Komodo vs. Cobra," you don't find out who wins. Which bite is more potent is fairly clear: A Komodo bite will kill an animal within several days, while an animal bitten by a cobra only lives for a few minutes [source: National Geographic]. But a Komodo dragon's mouth is still undeniably fatal.

Komodo dragons, like cobras, are immune to their own poison. Like all biological defenses, this has possible applications in medical research. If scientists can find the antibody in Komodo blood that renders it immune to its own bacterial cocktail, it could lead to a new class of hardcore antibiotics.

In 2004, scientists discovered the antibody in cobras that blocks the effects of cobra venom. They believe that understanding how the venom receptors are blocked in these animals could lead to improved treatments for heart attacks, strokes and cancer [source: National Geographic].

For more information on Komodo dragons and related topics, prowl through the links below.

Waste Not, Want Not

A Komodo dragon only leaves about 10 percent of its prey uneaten. For comparison, a lion usually leaves about 30 percent behind [source: Smithsonian]. In addition to the usual parts (and the not-so-usual parts, like intestines) it also swallows hair, bone, hooves and horns. It can’t even digest that stuff. So what happens to it? After a meal, the dragon coughs it up in a disgusting-smelling ball known as the gastric pellet.