by Chris Obenschain
NEXT PAGE 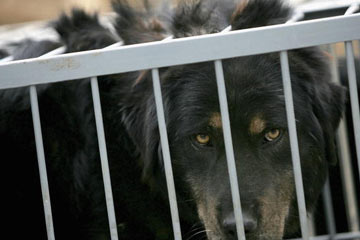 It's difficult to breathe. A thick, frothy pool of saliva in your mouth swishes unpleasantly back and forth across your tongue. You would like to drink it -- at this point any sort of liquid, even warm spit, might help ease your maddening thirst and dehydration -- but the muscles in your throat won't allow you to swallow. As you lie there, partially paralyzed, sick from fever and thirst, each labored breath becomes a chore. Frequent hallucinations and your mind's growing instability make it clear that the end is coming soon.

This isn't an excerpt from a horror novel. It's what happens to a person who contracts rabies and doesn't receive prompt treatment.

Rabies is a deadly virus found on every continent except Antarctica. It affects both animals and people and is typically transmitted through the saliva of an infected animal by a bite or contact with an open wound. It's also one of the world's oldest infectious diseases.

Cases of rabies date back to the dawn of recorded history. More than 4,000 years ago, the ancient Mesopotamians documented cases of rabid dogs and steeply fined their owners. In the third century B.C., Greek philosopher Aristotle wrote about transmission of the disease. In the 1500s, people commonly made pilgrimages to Liege, Belgium, seeking protection from rabies by Saint Hubert, the patron saint of huntsmen [source: RabiesFreeWorld].

It wasn't until the late 19th century, however, that an effective cure was found. In 1885, French scientist Louis Pasteur saved the life of a young boy who had recently been bitten by a rabid dog. Pasteur had been working on a rabies vaccine for several years and had recently cured infected animals in his laboratory. By promptly administering the young boy this new, then-untested vaccine, Pasteur saved the child's life and turned rabies into a treatable disease. However, the vaccine was, and still is, only viable as a preventive measure or for those who have recently contracted the virus [source: Cohn].

Pasteur may have created a vaccine, but he didn't eliminate the disease. Rabies is still a very real threat to animals and people all over the world. Click over to the next page to see exactly how rabies works and what it does to those unlucky enough to get it.

How to Prevent Infections From Animals