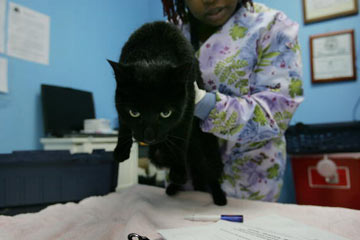 Although rabies certainly does affect humans, it's largely a disease that exists and spreads among animals. Most people are knowledgeable enough about the disease to be wary of an animal that's foaming at the mouth, but there are many other symptoms an infected creature may exhibit. In fact, some rabid animals, including those who have contracted the "dumb" form of the disease, never foam at the mouth. Almost all cases of rabies in humans are contracted from an infected animal, so it's important to know what to look for.

Rabies typically infects a variety of animals that vary by region. In the United States, raccoons are the most common carriers of the disease, but bats more often transfer it to humans [source: CDC]. Skunks and foxes are also frequent vectors for the virus, but it has been found in everything from woodchucks to chimpanzees. A good rule of thumb: If an animal is exhibiting unusual behavior, try to avoid it and contact your local animal control office as soon as possible.

Unfortunately, it's often difficult to tell if an animal is just acting strangely or actually poses a real threat. A dog may turn around in circles and snap at the air just because it feels like it, not because it's rabid.