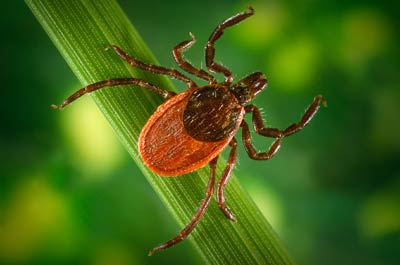 Hard and soft ticks differ in how they behave and find food. Soft ticks generally live in animals' nests and burrows. Females lay their eggs in their host's nest. Larvae, nymphs and adults crawl through the nest to find hosts. They usually feed at night, and they don't spend much time attached to a host. While hard ticks may spend days consuming a host's blood, soft ticks often finish a meal in about the time it takes a flea to do the same task.

Hard ticks, on the other hand, find food through a behavior known as questing. A questing tick positions itself on a blade of grass, a leaf or other vegetation. It stretches its clawed limbs outward and waits for hosts to pass by. Ticks can't jump or drop down onto their hosts -- when a host brushes against a questing tick, the tick simply hangs on. In many tick species, larvae quest at ground level. Nymphs climb a little higher into vegetation to find slightly bigger hosts. Adults climb highest of all in their attempt to find large animals to use as hosts.

Questing often involves a lot of waiting, and it may seem like such a haphazard method wouldn't be very successful. But ticks use several signals to decide when and where to quest. Many tick species have eyes and can detect color and movement. Hard and soft ticks can detect carbon dioxide (CO2) that animals produce as they exhale. By following these signs, ticks have a good chance of finding hosts.

Some species of hard ticks don't spend much time questing. They find a host as larvae and stay on that host for their whole lives. These are known as one-host ticks. A few species are two-host ticks. They mature from larvae to nymphs on one host, then find a second, larger host as adults. Most hard tick species are three-host ticks, which feed and drop to the ground at each stage of their lives.

Since ticks rely on blood for food, they have the potential to transmit diseases from one host to the next. Let's take a look at some of the diseases ticks can carry and how doctors can treat them.

Different types of ticks live all over the world. In the United States, predominant species include:

To learn more about tick species around the world, check out the Armed Forces Pest Management Board database and the Tick Identification Key.