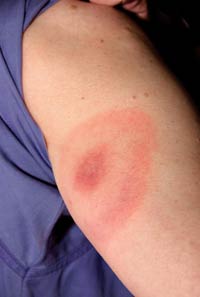 The bull’s-eye rash is a typical symptom of Lyme disease, which ticks can transmit to people and animals.
Photo courtesy CDC/James Gathany

A freshly hatched tick might be free from disease, but as soon as it takes a meal from an infected animal, it becomes a potential disease vector. In fact, ticks can carry more diseases than any other arthropod in the world. Their efficiency at spreading infection comes from the way they feed. Many tick species feed on at least three hosts before they die. If one host is sick, the tick can carry the infection to the others. Hard ticks also have to keep their mouthparts embedded in their hosts' skin for hours or even days before they finish a meal. This gives pathogens plenty of time to make their way into the host.

Here's an overview of how a tick typically becomes a disease vector:

The diseases ticks transmit vary from place to place. This is because different animals and their species-specific diseases thrive in different parts of the world. But that doesn't stop tick-borne illnesses from spreading outside of a particular geographical area. A good example is Rocky Mountain spotted fever, the first disease positively identified as having a tick vector. As its name implies, Rocky Mountain spotted fever started out in the Rocky Mountain area of the United States. Migrating animals have carried ticks and bacteria to other parts of the United States. Today, the disease has spread to much of the Southern, Central and Eastern United States.

Like Rocky Mountain spotted fever, many of the other diseases ticks can spread to people are rickettsial illnesses. These are caused by bacteria in the Rickettsiae family. A wide variety of tick-borne rickettsial exist in different parts of the world. Some are:

Many rickettsial illnesses are spotted fevers that cause rashes, nausea, vomiting, headache and fatigue. Most of the time, these illnesses respond to antibiotics, but some can be fatal without prompt medical treatment.

Black-legged ticks, also known as deer ticks, can carry a bacterial infection called Lyme disease. Lyme disease exists in Europe, Africa, Asia and much of the United States. It causes a red bull's-eye rash, fever, headache, a stiff neck and muscle pain. Ticks can also transmit the malarialike illness babesiosis, which comes from protozoa. Some tick-borne illnesses are dangerous only to animals, such as swine fever, which infects pigs, and canine prioplasmosis, which infects dogs.

Removing a tick promptly is vital to preventing many of these diseases. Next, we'll review the right way to remove a tick.

Some ticks can cause tick paralysis, especially if they attach near the neck or spine of children or animals. Typically, symptoms begin to disappear as soon as the tick is removed.