by Mark Mancini Jan 12, 2018
A blackbird and two sparrows share a birdbath. And maybe a friendly chat. Philip Marazzi/Getty Images

A good bird-watcher can identify the local species not just by sight, but also by sound. It's something the Audubon Society calls "birding by ear." With practice and a good field guide, avian enthusiasts learn to recognize the trademark "tweets," "cheeps" and "hoots" that various birds emit.

Mastering this skill requires a basic understanding of how and why our feathered friends communicate. Often, a given species will use its own distinctive set of sounds — like mating calls and territorial threats — to get assorted points across. Take the rock pigeon. These guys court each other with gentle coos. And to signal distress, they use harsh grunt. If an individual rock pigeon is to survive and procreate, it must be able to recognize both vocalizations.

But do a pigeon's noises mean anything to passing crows or cardinals? Can birds understand the calls made by other species?

We recently discussed this topic with Robert D. Magrath, an ornithologist and behavioral ecologist at the Australian National University. Magrath's co-authored multiple studies about interspecies communication in birds. Much of his research has dealt with avian alarm calls. These are the warning cries that birds send out when a predator is sighted.

As Magrath tells us via email, "Just about every bird species we have studied locally respond to other species' alarm calls, and we suspect eavesdropping on other species' calls is widespread around the globe. Perhaps this is not surprising given that almost all species are vulnerable to predators and so should use any available cues that predators are around."

One good example of this phenomenon can be found in the relationship between black-capped chickadees and red-breasted nuthatches. The two songbirds have much in common. Both species are indigenous to North America and attain similar sizes. They're also wary of raptors. When chickadees see a goshawk, owl, or some other winged predator, the birds issue an alarm call. Like the TSA, their warnings recognize different threat levels. High-pitched "seat" calls are used to tip off other birds about a raptor that's flying far overhead. The eponymous "chick-a-dee-dee" cry rings out whenever a perched raptor is seen nearby. Extra "dees" are added if a killer looks especially dangerous.

Research has shown that red-breasted nuthatches understand the chickadee's warnings. And with close listening, they can decode the exact degree of danger that's being advertised in these alarm calls. Clearly, eavesdropping has its benefits.

Alarm calls can even trigger a response from non-avian listeners. The tufted titmouse, for example, is a songbird whose anti-raptor warning cries send squirrels and chipmunks running. Amazingly, these mammals are known to spread the distress signal by imitating it with their own voices. Sparrows, cardinals, and jays will also mimic the titmouse's signature alarm call. Thus, an interspecies chorus heralds the arrival of an oncoming threat.

Okay, so do birds just have an innate understanding of other species' alarm calls? Or do they pick up the skill over time?

Magrath says that, at least in some cases, certain birds actively learn to identify the cries. Superb fairy wrens are a common sight on the Australian National University campus in Canberra. As it happens, the school grounds also receive plenty of visits from a grey bird known as the noisy miner.

According to Magrath, there's a botanical garden across the street where the wrens like to hang out, but the miners avoid it. In one of his studies, he was able to demonstrate that superb-fairy wrens who lived on-campus fled when a recording of miner alarm calls was played. However, the wrens at the botanical garden — where, again, no miners are present — did not react to the same recording. This strongly suggests that inter-species call recognition isn't innate: it has to be learned.

"We've subsequently even trained fairy-wrens to recognize novel sounds as alarm calls by pairing them with the presentation of gliding hawk models, which unequivocally shows learning," Magrath notes.

Beyond Sounding the Alarm

Alarm calls aren't the only vocalizations that can transcend species. It's common for birds to recognize other bird species sounds, if there's some benefit to recognition. "Some species defend territories against members of other species, and respond to their territorial song. Others can recognise contact calls, which helps them form mixed-species flocks and find food," says Magrath.

Then there's the cuckoo, a notorious brood parasite. Females lay their eggs in the nests of other birds who are then (sometimes) tricked into raising the cuckoo's chicks. To pull off the charade, baby cuckoos imitate the begging cries made by infants of the host's own species.

NOW THAT'S INTERESTING
Like "chickadee," the name "kookaburra" is onomatopoeic — it's derived from the world-famous cackle made by these birds. Hollywood seems obsessed with their exotic laugh. Kookaburra cries can be heard in the background of such films as "Raiders of the Lost Ark," "The Naked Gun," and assorted "Tarzan" movies.

Good News, Mars Colonists: Pure Water Ice You Can Dig Up With a Shovel 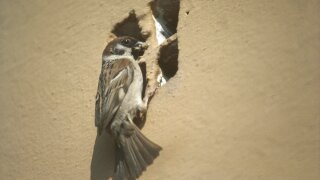 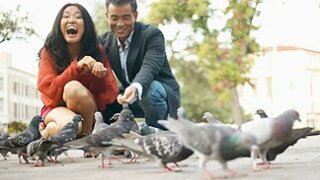 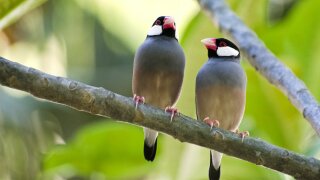