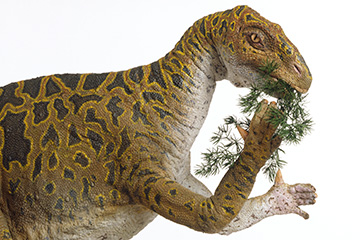 Certified murder weapons, those thumbs. Or were they?
Ray Moller/Dorling Kindersley/Getty Images

She may look like easy pickings for an Early Cretaceous predator, but this iguanodon isn't going down without a fight.

As a pair of bloodthirsty Utahraptors rush in for the kill, this 16-foot (9-meter) foliage destroyer simply whips out her stiletto thumb spikes as if to say, "Bring it, you Salt Lake sons of guns. I've got one for each of ya!"

The first attacker springs through the air, talons eager for blood. And so iguanodon obliges it. Much like human martial artists more than 100 million years later, she dodges and administers a brutal thumb strike to her opponent's throat, puncturing the delicate flesh and splattering the dirt with blood.

But the other Utahraptor has already pounced as well. She feels its talons sink into her back, severing veins and seeking organs like water-thirsty roots. She tries to shake the predator free, but it holds fast. The talons sink deeper with a flash of red-hot pain. Finally, she feels its teeth bite into the side of her neck — which lets her know exactly where her enemy's head is.

She drives both thumbs back into the attacker's eye sockets, gouging forth blood and jelly, sending the thing tumbling back to the earth in a tangle of claws, feathers and blind rage.

Or at least that's how things might have gone. It's easy to construct such cinematic dino melees, especially when confronted with a spike-thumbed dino like those of the Iguanodon genus. But no matter how much we want those thumbs to be certified murder weapons, we still don't know exactly what they were for.

Of course, we have guesses. We've been making guesses about iguanodon anatomy since the early 19th century. British paleontologist Gideon Mantell actually mistook the thumb spike for a horn when he discovered the first set of iguanodon fossil remains. It was an incomplete skeleton, so he positioned the spike atop the creature's nose, like that of a rhino. We can forgive Mantell this mistake, however, as iguanodon was just the second dinosaur ever discovered, predating the 1842 invention of the word "dinosaur" itself by 33 years [source: Dixon et al.].

Subsequent discoveries greatly altered our notions of the bulk and posture — plus we also gave the beast its thumbs back. Really, we're delighted for iguanodon to have them. We just wish we knew what it used them for.

Because while the defensive thumb dagger explanation might seem rock solid at first, it breaks down a bit when you imagine this large herbivore having to engage in some pretty close combat with its attackers. Our above action sequence even suggests this. How unlikely would that first ninja-like counterattack be from a lumbering giant? And how grievous would her injuries be from her tussle with the final Utahraptor?

Fortunately, we have other theories to contend with. While our inner child can't help but pit one dinosaur species against another in vicious interspecific competition, there's no reason why iguanodons wouldn't have used these ferocious Fonzie thumbs on each other in intraspecific competition. Ayyy?

Male iguanodons might have thumb sparred over potential female mates. Or individuals of either sex might have competed for resources such as choice vegetation groves or watering holes. Or perhaps they allowed the mating male iguanodon to better grapple his mate during a violent lovemaking session. In this last case, the thumb spike would function much like the hind mating spurs of various reptile and birds species.

Still, some paleontologists dismiss both love and war in favor of a good meal. Yes, it's possible that iguanodon used its sinister-seeming instruments to bust open fruits or strip branches, much like the enlarged wrist bones of red and giant pandas [source: Switek].

Nature is full of such examples. Just consider the aye-aye of Madagascar. The nocturnal lemur boasts two extra-long fingers on each hand — and to the untrained eye the digits look pretty sinister. But one's for tapping tree trunks to sound out bugs and the other is for fishing the delicious morsels out of the wood.

And so iguanodon continues to perplex us. Across the vastness of evolutionary time, she gives us a double thumbs-up. We just don't know if we should run or throw her a ripe mango.

As the dinosaur action sequence illustrates (a HowStuffWorks first, I think), I still long to believe in a genus of thumb-stabbing dinosaurs. But we'll likely never know for sure, at least until time-traveling paleontologists go back and suffer a good shanking firsthand.